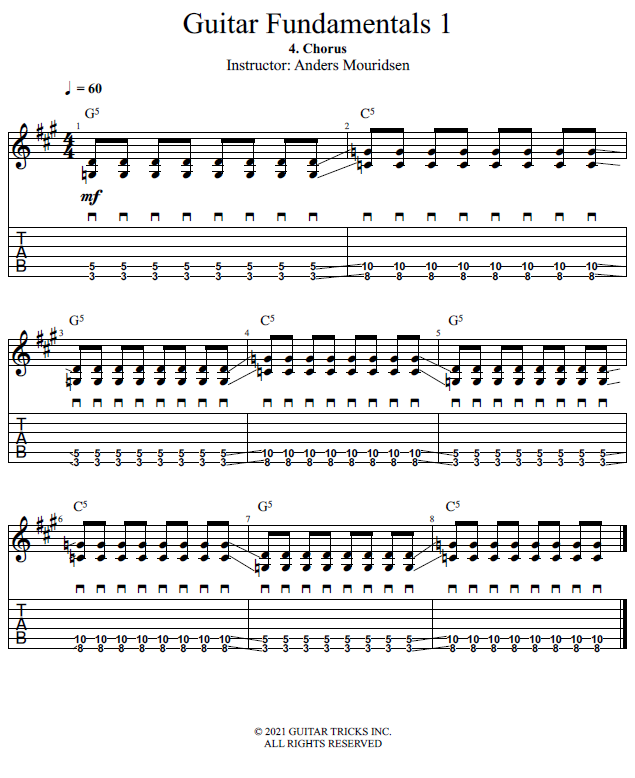 Now it's time to learn about the all-important section of a song called a chorus and then we'll use that knowledge to come up with a chorus for our own song.

First let's take our road trip metaphor, the riff is revving the engine of the car in the driveway. Then the verse is cruising down the highway. Now the chorus would be our destination, and traditionally it's the climax of the song where everyone can sing along. Think of our destination as something epic you've always wanted to see like the Grand Canyon, for example; or it could be something fun like wedding or a party.

So how do we make the chorus more climactic than the verse? Well, in the verse we stayed on each of the chords for quite a while, which gave us that steady 'cruising down the highway' feel. So now let's try a change chords a bit more quickly and see how that works.

Let's go to a G power-chord and play that for 1 bar. After that we'll go all the way up to C in the 8th and 10th fret. It's a bit of a jump, but you'll notice that I'm sliding the power chord on the last strum. That helps, so you don't have to make the jump in between strums. Another helpful tip is to stare at the fret you're moving to. Don't stare at your fingers, while they're moving, Stare at the fret you're aiming for!

Now let's practice the chorus part together. I'll count us in and then we'll play through it slowly.