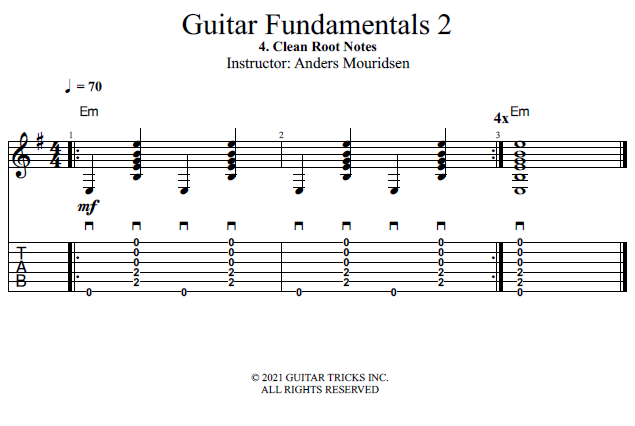 This concept is usually referred to by the term root-chord strumming. What we've been doing up until now would be better described as bass strings, treble strings strumming. So let's explore the difference.

I've been telling you this whole tutorial to not worry about being super precise in your right hand, and that's still true. That being said, the term root-chord strumming refers to the fact that the root note (or our main bass note) is separate from the chord, which requires an extra bit of right hand precision. Again, there's nothing wrong with the looser approach, but let's explore the precise version for a moment.

Grab your E minor chord and what's our root note of E minor? Before you think it's a harder question than it is, let me remind you that the root note is the same as the name of the chord, so the root note of E minor is E. Of course we have several E notes in this chord, but we want the lowest one as our bass note, so it'll be the low E string. Hit that by itself, and then strum the high strings.

It's a bit tricky going from the very precise single note technique in your picking hand to the looser strum of the treble strings. But that's actually a really good exercise and as you can hear it sounds cool.

Try to be as precise as you can, but as you'll also hear it does not sound bad in any way, when you accidentally hit more than just the low E string.