How I Started Playing Guitar 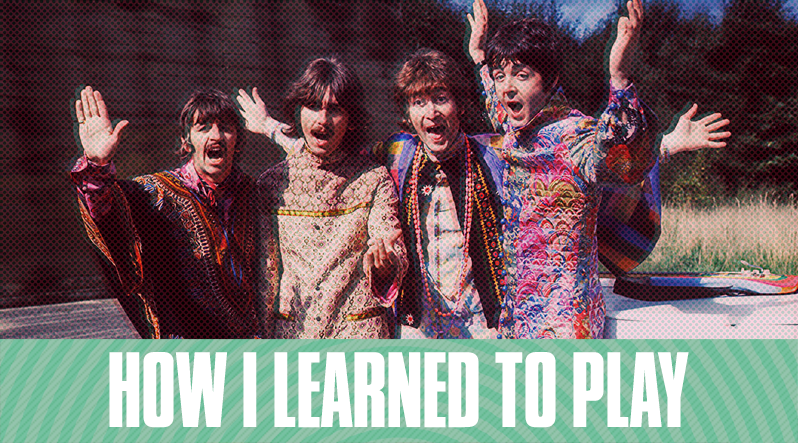 Header image by By Parlophone Music Sweden [CC BY 3.0  (https://creativecommons.org/licenses/by/3.0)], via Wikimedia Commons, modified from original

I remember seeing my friends play during high school. They played at the little amphitheater during lunch and even though the kids mostly ignored them, I thought it was the coolest thing.

Up until that point, most of my musical taste was influenced by my older brother, cousins and friends. We listened to a lot of Eminem, Christina Aguilera, Backstreet Boys, and other 90’s radio hits. But shortly after that lunchtime gig, I became more interested in guitar-driven music.

I spent a few years watching my friends play their guitars and eventually convinced my dad, who played in his younger days, to get one for me.

Giving Up and Starting Over and Over Again

One of the first songs I tried to learn was “Folsom Prison Blues” by Johnny Cash and I had such a hard time holding those chords. I remember spending 20 or 30 minutes trying to learn open chords like B7, or an A. My fingertips felt like they were going to fall off. 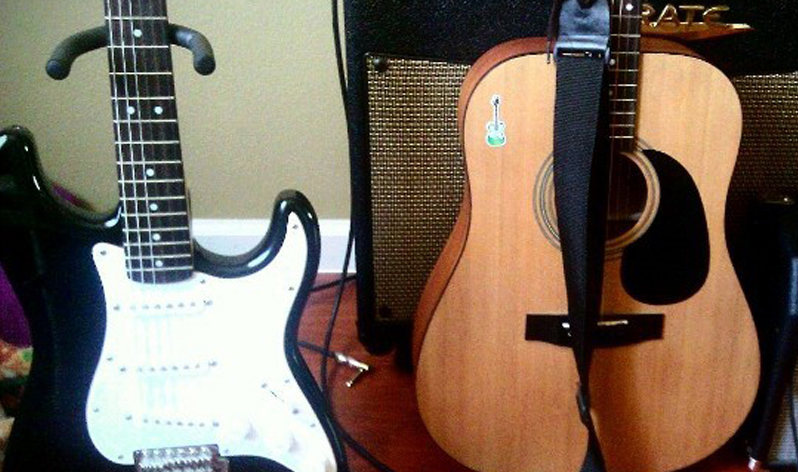 The first guitar I ever got is the one on the left, a black and white Strat knock off. Then I spent $100 of my own money when I was 18 years old, and bought that Jasmine by Takamine acoustic on the right. They play great to this day and proves you don't need to spend a fortune for a quality instrument. I eventually gave these guitars to my little brother.

I would go to sleep and wake up the next morning and my fingers would still hurt! I spent hours practicing, which I don’t recommend if you’re learning anything new, guitar or otherwise. I eventually got burnt out and to make matters worse, the old strings on that guitar my dad bought finally gave out and snapped.

The high E string flew backwards and the needle-like tip of the string hooked into the back of my strumming hand. I have a small scar from this. So with that traumatic experience and all the physical pain, I gave up.

I put the guitar down for what was probably one or two months. I would look at the guitar here and there, pick it up to try my hand at a few chords, but nothing stuck until I my older brother introduced me to my favorite band.

“Ladies and gentlemen, The Beatles!”

My brother had tried his best to convince me that I should learn how to play songs by The Beatles. I had only heard “Help!” and “She Loves You,” and those types of songs.  I didn’t care for The Beatles, I thought they sounded funny and that their wigs were even funnier.

But then I heard “Helter Skelter” and thought, what the heck? This is The Beatles? And then I went down a deep rabbit hole I never truly came back from. I listened to The White Album, and became enamored with songs like “While My Guitar Gently Weeps,” which you can learn about by watching the video below, and other tracks like “I, Me, Mine” and “Daytripper.”

I wanted to try and learn “Helter Skelter” so I picked up the guitar and tried playing it. It sounded bad and playing on those high strings tore up my fingertips all over again. But it wasn’t for nothing.

As a beginner, I found that playing a single string was a lot more satisfying than playing chords because it actually sounded like part of a song. It was easier to play on just a single string than to try and get three or four of my fingers to make a chord shape. I started to learn a bunch of single-string riffs from Iron Maiden to The White Stripes. And then I discovered tabs. 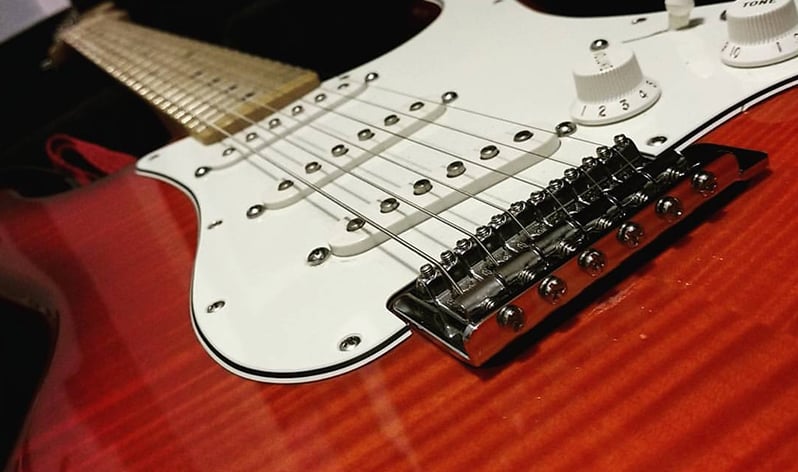 I bought this Fender Strat as a college graduation gift to myself even though I was super duper broke at the time. Worth it!

I’m a self-taught guitar player and that means I can’t read actual sheet music but I can follow tabs. It would be strange if new guitar players today didn’t have access to tabs, which thankfully they’re available on every song lesson here at Guitar Tricks, and learning how to read tabs is just as simple.

With the understanding of tabs, a few licks and chords under my belt after a year of struggling on and off, I came across a chap named Eric Clapton and his band, Cream. And then I heard the live version of "Crossroads" and that messed me up. If you don't know what I'm talking about, watch the video below where instructor Tom Finch talks about what it was like to teach "Crossroads."

Then from Clapton, I listened to Jimi Hendrix and that blew my mind open even more. Then came a flood of many other acts like David Gilmour from Pink Floyd, Carlos Santana, and countless others. But I wouldn’t have gotten there if it wasn’t for The Beatles and hearing “Helter Skelter,” which led me to learn with a method that best fit me, that is, one string at a time.

Everyone learns guitar differently. Some are able to make chord shapes right off the bat, some have a knack for rhythm and running through licks across the fretboard. The important thing to note is that everyone’s guitar learning path is different and even though I’ve been playing since high school, that doesn’t mean I’m a master. To be honest, I’m not that great at playing, but I’m comfortable enough to pick things up on the spot whether by ear or with tabs.

Learning guitar and getting to a place where your playing is satisfactory takes a long time, and it takes a lot of practice and a lot of patience. Luckily, if you’re reading this, you’ve made it to the right place. Guitar Tricks has a ton of resources to help speed up your learning, so don’t forget to check them out!

That’s my story, what’s yours? Tell me about how you got started playing guitar and why. What’s the first song you ever learned or tried learning? Leave your comments below, I’d love to read them!

Billy is the Community Support Specialist for Guitartricks and he's been learning guitar for over a decade! He's also probably answered your emails or taken your calls.