The Origins of the Blues and its Influence

The blues started, perhaps after the end of the American Civil War, though it is not clear, and the rhythmic, call-and-response style of music arose from African-Americans and black communities in the deep south. The music and lyrics were work songs, songs that described one's hardships, and heartbreaks, especially as a black person in the southern states and across the country.

The blues music genre produced a number of great artists such as B.B. King, Muddy Waters, and more. Even today, the blues plays a big role in pop music and continues to influence the next generation of aspiring musicians. As every guitar player may know, there comes a time in their learning where they will eventually, somehow, find an interest in the blues, especially the 12 bar blues.

The 12 bar blues is technically a chord progression, and has been used in music for over a century. To understand the form, one must first understand the basics of musical key structures and scales.The 12 bar form, as stated above, only used the I - IV - V chords of a key. When speaking of, for example, the key of E, this refers to the E major key. So which notes are in E major? The notes of an E major scale are below:

Okay, now that we have the notes down, we have to figure out which chords to play. For chords in the key of E major, it goes like this:

Now that we have the chords, we can put them into the 12 bar form. So what is the form anyway? It looks like this: 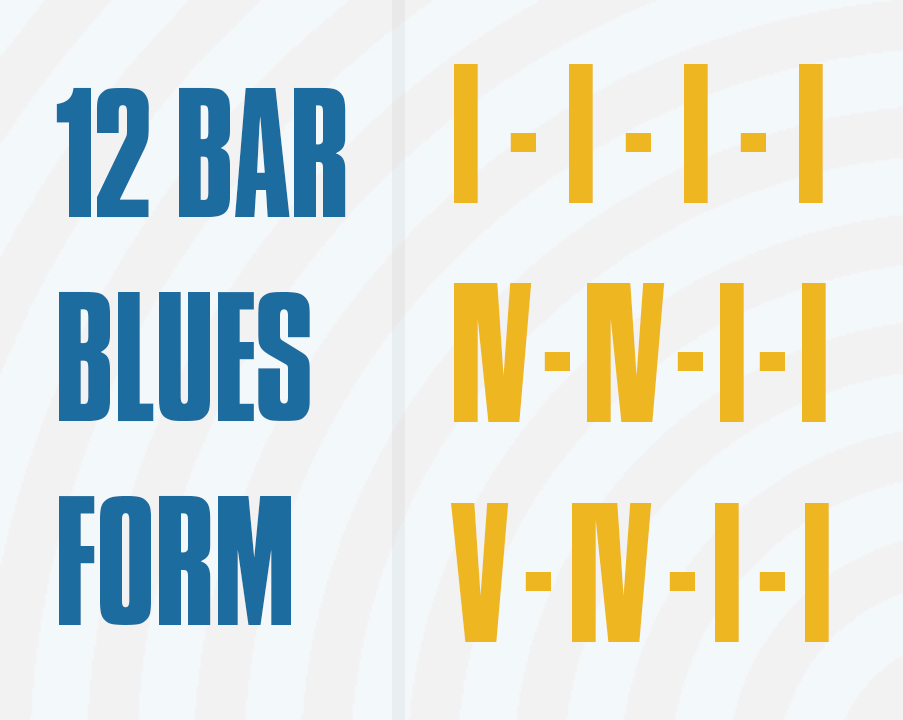 So what does this mean? This means that the 12 bar blues consists of 12 bars, or measures, and a great way to think about it is to split up the chords into 3 groups of 4 bars. So, to play the 12 bar blues in the key of E, we’ll play the I chord four times, then the IV chord twice, then back to the I two more times, and so on.

This is what the 12 bar blues will look like in the key of E major:

The great thing about this is that the 12 bar form is changeable and you can insert any key you want into this formula and it will be the same. Some guitarists even like to change it up a little and add a little turnaround at the very end to spice it up. Sometimes the final bar is the V chord. It’s up to you to have fun and experiment!

For a full lesson on the 12 bar blues, check out the lesson with Gary below.

Don’t forget, we also have an entire course on the blues with Anders Mouridsen.