10 Things You Need to Know for Killer Vibrato 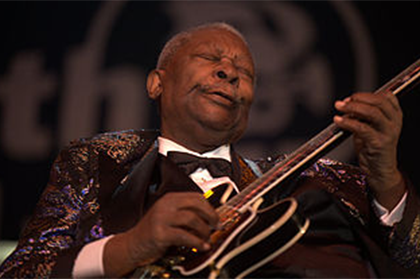 One of the key elements of phrasing is vibrato. Musicians of all sorts, including singers, use vibrato to help add expression to their music. Vibrato makes your notes come alive. It adds warmth and gives notes more character and longer sustain. By mastering vibrato technique, your guitar playing will acquire a vocal quality much like that of a human voice.

The word vibrato comes from the Latin word vibrÄre, which literally means "to shake." Just like when a singer holds a note and makes it waver back and forth, vibrato on guitar involves bending and releasing or pushing and pulling the fretted string in repeated pulses, tightening and slackening it. In effect, doing what tuning pegs do. Vibrato distorts a note slightly above and below the normal pitch. It can be accomplished with the fingers, a whammy bar, stomp box or plug-in.

Vibrato is one of the most challenging techniques of guitar playing, but mixing it with other techniques like string bending, legato and harmonics can make you a more dynamic player. Let's take a look at ten things you should know to help you develop a polished vibrato.

The difference between bends and vibrato. A bend is used to move the sound from one note to another. For instance, if you play a C note and bend the string up one whole step, then you will reach the D note. The vibrato technique is also used to cause a modulation in pitch, albeit a smaller change than that of a bend. By smoothly varying the pitch between slightly flat and slightly sharp via a series of slight bends and releases, vibrato gives a different flavor to a bend. It is usually performed faster and is more prolonged than a bend, though like a bend, vibrato comes more from your ears than it does your hands.

The difference between vibrato and tremolo. The terms vibrato and tremolo are sometimes used interchangeably, although they are separate effects. Vibrato is defined as a periodic variation in the pitch (frequency) of a musical note, and tremolo, a periodic variation in volume (amplitude). Many people mistake vibrato for tremolo. Vibrato is, as the name implies, vibrating a string in such a way that the tone, and not the volume, fluctuates. Vibrato is always about pitch while tremolo is always about volume.

The movement is in the hand more than the finger. Three different motions are usually used to create the vibrato effect (depending on the instrument, type of music, and personal style): vertical, horizontal, or circular. Ideally, vibrato should come from the wrist and not so much from the fingers. The effect is produced by lightly moving your hand back and forth to make the pitch wobble, or using your wrist and fingers to wiggle the string in cyclic hand movements. Some guitarists anchor their thumb over the neck of the guitar when playing vibrato while others, like B.B. King, use only the finger holding down the string to come in contact with the neck. The back of the hand is not touching anywhere!

Number of fingers to use. As for the number of fingers needed to produce the effect, a small, subtle vibrato might not require the assistance of other fingers for support like string bending does; the fretting finger should be sufficient. However, for sustained vibrato or vibrato on the first or second frets, using multiple fingers for bending might be necessary. Some players simply prefer using multiple fingers. Ideally, you should be able to execute vibrato on all four fingers, including your pinky.

Let the note sound before you apply the vibrato. Typically, you want to let a note ring for a fraction of a second before beginning the vibrato. The reason to do this is that when a vibrato is applied, you are actually bending slightly off the note's natural pitch. By letting the note rest before the vibrato, you ensure the listener can hear a firm target note, even if it's a mere hint, putting the subsequent vibrato into a more defined context.

Know where to put your vibrato. Sometimes too much of a good thing is just plain overkill. If you apply vibrato all over a piece of music, the effect will become diluted. It's best to add vibrato to a note when it is going to be held for a period of time, or when you want to make a particular note shimmer.

Vibrato speed. Vibrato can be done fast or slow, giving it a fairly aggressive versus a more lazy sound, depending on the genre of music you are playing. For instance, if you want to play a blues number and add some feeling to a riff, you can try playing a slower vibrato in a circular motion, or if you want to play something like Iron Maiden or Avenged Sevenfold, you can play a quick and narrow vibrato. You will vary the pitch and speed of the vibrato depending on how you want your phrases to speak.

Vibrato notation. Both tab and standard notation indicate a vibrato by either marking the note with a "v" or a squiggly line above it (sometimes shortened to ~). The notation for a vibrato, however, never tells you how quickly or slowly to bend and release. That's up to you. Regardless of your speed, make sure that you keep the fluctuations steady and even. Vibrato notation does tell you whether to make the vibrato narrow (that is, you bend the string only slightly—less than a half step—for each pulsation) or wide (you bend the string to a greater degree—about a half step or more) by noting a tighter, more frenetic-looking wavy symbol or a more languid, relaxed-looking one. In many cases, vibrato won't be marked on a tab at all, leaving it up to you when to apply it.

Types of vibrato. There are basically three types of vibrato: classical, traditional and blues. Classical vibrato is the most subtle and light sounding of the three styles and is usually performed on nylon sting (classical) guitars, but it is equally effective on electric or acoustic guitars. The pitch change in a classical vibrato comes from moving your hand repeatedly from left to right while leaving the full pressure of the finger down on the note. When you move your hand toward the neck you are in effect pulling the string and making it tighter, and therefore the pitch goes up. When the hand moves toward the body of the guitar you are making the string slightly loser and the pitch goes down.

Traditional vibrato is quite a bit different from classical. Instead of rocking back and forth horizontally, you are going to be moving vertically, bending the string up a bit and letting it back down repeatedly. Most of the motion that creates this vibrato is coming from the wrist. The fingers and elbow help a bit as well.

Blues vibrato is generally a bit wider and more exaggerated than the other two styles. This type of vibrato gives you plenty of soul but requires a bit more strength to pull off. Putting your thumb over the top of the fretboard can provide you with a bit more leverage so that bending the string up higher won't be as difficult.

Whammy bar. Some guitarists use their whammy bar for vibrato. These bars, (often referred to as a whammy bar, vibrato arm/bar, or tremolo arm/bar) add vibrato to the sound by changing the tension of the strings, typically at the bridge or tailpiece of an electric guitar. The bar enables you to quickly vary the tension and sometimes the length of the strings temporarily, changing the pitch to create a vibrato, pitch slide or pitch bend effect. Jeff Beck and David Gilmour do some things with their whammy bars that most of us would use a regular vibrato for, only the bar gives them a wider range of raising and lowering the pitch. It's easy to go too far with the whammy bar, though, so use it with a gentle touch.

Perfecting vibrato takes time. Start out slow and steady and gradually build up speed. Use a metronome to practice vibrato and try to match your bends to the metronome's clicks, gradually increasing the tempo. You might initially try to copy your favorite player's vibrato, paying careful attention to the nuances of their technique. Once you get your vibrato sounding exactly like theirs, then copy someone else's. You will find that certain qualities will stick with you while others will fall away. Because it has more to do with feel than it does technicality, every guitarist will have his or her own unique vibrato. Learning from your guitar heroes and experimenting with the technique will help you find your voice.

And if by chance you're not using vibrato in your solos, by all means give the technique a go. Guitar playing without any vibrato at all is like a basket of freshly baked tortilla chips with no salsa.

For more on vibrato, check out the following GT tutorials:

all the big singers use vibrato in their voice even Elvis. This was great to learn how to use your guitar to make it happen. Thank you for thinking of us all to teach us. Have a Wonderful Holidays.