10 Ways to Beef Up Your Barre Chords 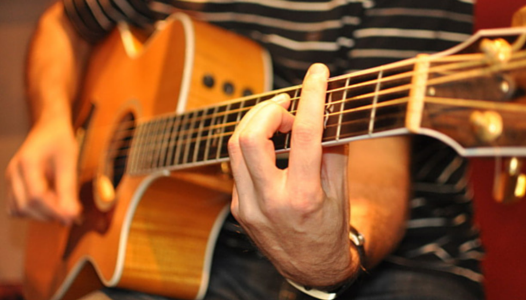 Do you struggle to nail a crisp-sounding barre chord? If so, you know firsthand how frustrating it can be to play one of these beauties without buzzing or dead strings. Getting a barre to resonate brightly can be a real challenge, especially on an acoustic guitar. But with a little elbow grease, or rather, finger grease, and a whole lot of dedication, YOU can conquer the barre chord.

Playing a full barre chord involves using the index finger across the entire set of strings. What makes this difficult is the tension of the strings and the dexterity needed to hold them all down at once to produce a chord that sounds clean and clear. Here are 10 solid tips to help you master the mighty barre:

1. Practice + Patience = Perfection. Don't expect your barres to sound great right out of the gate. The ability to play barre chords is an acquired skill. Your fingers not only need to build strength, they also have to get comfortable with the chord shapes. Just like you learned to play notes and simple chords, learning to play barre chords is a process.

2. Index finger placement. It's tempting to place the index finger at a slight diagonal so that it's further from the fret on the first string. But this will make the chord sound fuzzy! Make sure your index finger is straight and close to the fret.

3. Proper pressure. While it's important to press your finger firmly down on the strings to make them sound, you don't want to push too hard and risk straining your hand. Keep the pressure as even as possible across all the strings, and experiment to see how much pressure you need to clear the chord without overtaxing your hand. Find the right balance.

4. Don't be a wimp. Yes, learning to play barre chords can get a bit uncomfortable, just as learning to fret notes did before you built calluses. The important thing is to work through it. You will build the strength to play almost any barre chord. If your hand cramps, by all means take a break! - but do come back later.

5. Buzzes and muffles. Alter the positioning of your index finger slightly up or down to see if you can fix any buzzing or muffled strings. Try rolling your finger to the side a bit. Make sure your thumb is right behind the neck to give the finger enough support. Keep a close eye on your fingers and hand position.

6. Commit to making it happen. Dedicate a portion of your practice session to barre chords. Make it a habit to practice every song with them. Start by replacing an open chord for a barre, then gradually add more barres to the song. Learn to switch from one barre chord to the next.

7. Break down the barre. Approach the barre like you would any task that seems overwhelming: break it down into smaller, more manageable pieces. Start with your index finger on the first fret, first string. Play the note four times. Next, barre the first two strings in the first fret. Strum those strings four times. Press hard enough so that each note sounds. Next, barre the first three strings in the first fret and strum. And so on. Once you play through the entire exercise, move to the second fret and repeat, then to the third, the fourth, making your way up to the twelfth fret and then back down again. Do this exercise daily to strengthen your fingers. Remember to shoot for quality, not speed.

8. The ultimate barre workout. Stand with your hands hanging relaxed. Extend the fingers of both hands all the way out then close the fingers to a fist. Easy enough, yes? Now work your way up to doing it 200 times, as fast as you can, making sure you snap the fingers open and closed all the way each time. If your hands aren't developed, you'll start to feel it in your forearms after about 20-30 repetitions.

9. Start higher up the neck. If your fingers are really weak, try barring on the fifth fret. It can be much easier than starting on the first fret as the tension isn't as great. Try different places along the fretboard and see where you're most comfortable, moving closer and closer to the first fret.

10. Lower your guitar's action. A lot of guitars have high action, which makes it really hard to sound barre chords. If you suspect poor action, go to your local guitar shop and see if they can adjust it to help improve comfort and playability. Also check string gauge. Heavy strings will make barring more difficult.

I am 42 and I began to learn guitar from zero last March. In September barres were sounding pretty well. Practice and patience and one day youll realize you can do it. Dont give up on barre chords. We all can!

The hardest one for me is B. Once I nail that Ill be able to play many more songs. Anyone else struggle with that particular one?

The most important thing is not to rely on strength. Push down a string with your finger. Its easy. You will find it is not an exercise of strength. You want to push those strings only enough to get a clear tone. Pressing hard will give you cramps and make it even more difficult to move the shape and change chords in time to the music. When moving shapes, like from an A shape to an E shape, dont move all the fingers, but re-use the fingers that are in the right position already. Keep your touch light and minimise the movement, that is the only way to get fluid at playing barre chords. And you are right, persistence is everything, at times it will seem that its hopeless and you may even feel pain in your wrists. Stop until you feel better and start again.

.....combine tips 7 and 9 and definitely do not start at the first fret...the dreaded full bar F chord is not called that for nothing! Start, say at the 7th position and move gradually down the neck then move up the neck from the 7th.