A '7th chord' is another alteration created by adding a specific new ingredient to the major or minor chord.

But there is a caveat here, an exception. And that is there is a unspoken agreement in music that when you make a 7th chord, which you would think means to just add the 7th tone of the scale into the chord, you must first lower that tone by a half-step. That is just the rule!

Donâ€™t worry about the math because I will be showing you how to make these chords. Just listen to the effect it has: When I play D vs. D7, the D7 sounds a little unsettled, wants to move, but not back to its parent chord.

It wants to move to one of the other major chords in the song! So let's go to the G chord. Listen to how the D7 really makes you WANT that G chord! So, like the Sus4 chord, a 7th chord tends to be a passing chord - a chord in a song that serves to move the song forward by creating tension or anticipation.

******************
Important note: Music Theory is a sophisticated and complex study, much of which goes far beyond the scope of this particular Guitar Fundamentals 2 course. In some cases in these lessons, I am presenting a very simplified explanation of what is, in reality, a deeper and more complex music theory concept. My rationale is that I'd like to enable you to use these chords and variations in your music, even if you have not yet studied the deeper complexities behind them.

In common casual language between musicians, it is not unusual to call the chords taught in this lesson,'7th chords'. However, some of the constructions I have taught you in this section may more correctly be called 'dominant 7th', due to subtleties in their construction, and/or their function in a particular piece of music. 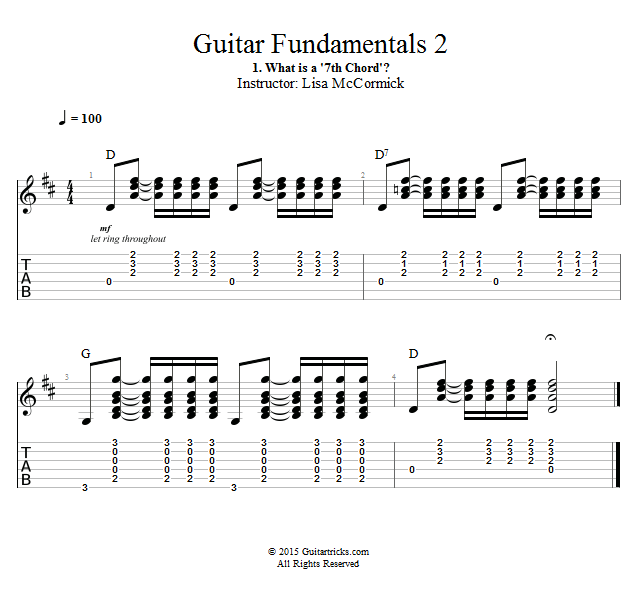