Adjusting from concert to dread

I recently acquired a used Yamaha f335 dreadnought guitar so I've been switching back and forth between my Ibanez concert style guitar. I really love both guitars for different reasons but I just can't get over how good the dreadnought sounds! (It will also be something to play outdoors, too since its less-nice than my Ibanez.) While it's most comfortable to play it standing, there are times when I sit and play it, too. But my main adjustment concern is getting used to the string width difference. My Ibanez seems so spacious and much more suited to fingerpicking so I will primarily use the dread for strumming but there are times when there's just a small bit of fingerpicking mixed in so I'd like to be able to play that without too much trouble....

What is the best way to get used to the different styles? (...besides just play, which I'm doing anyway....) Are there certain string awareness exercises I can do that would properly orient me to the strings on the dread better? Thanks for any help...here, you can see "Gypsy" from a recent practice video (also known as 'my Johnny Cash guitar').

I'm really happy to get back into playing guitar and I've resumed my lessons on here and have landed in Acoustic 1 and lots of Acoustic 2 already. 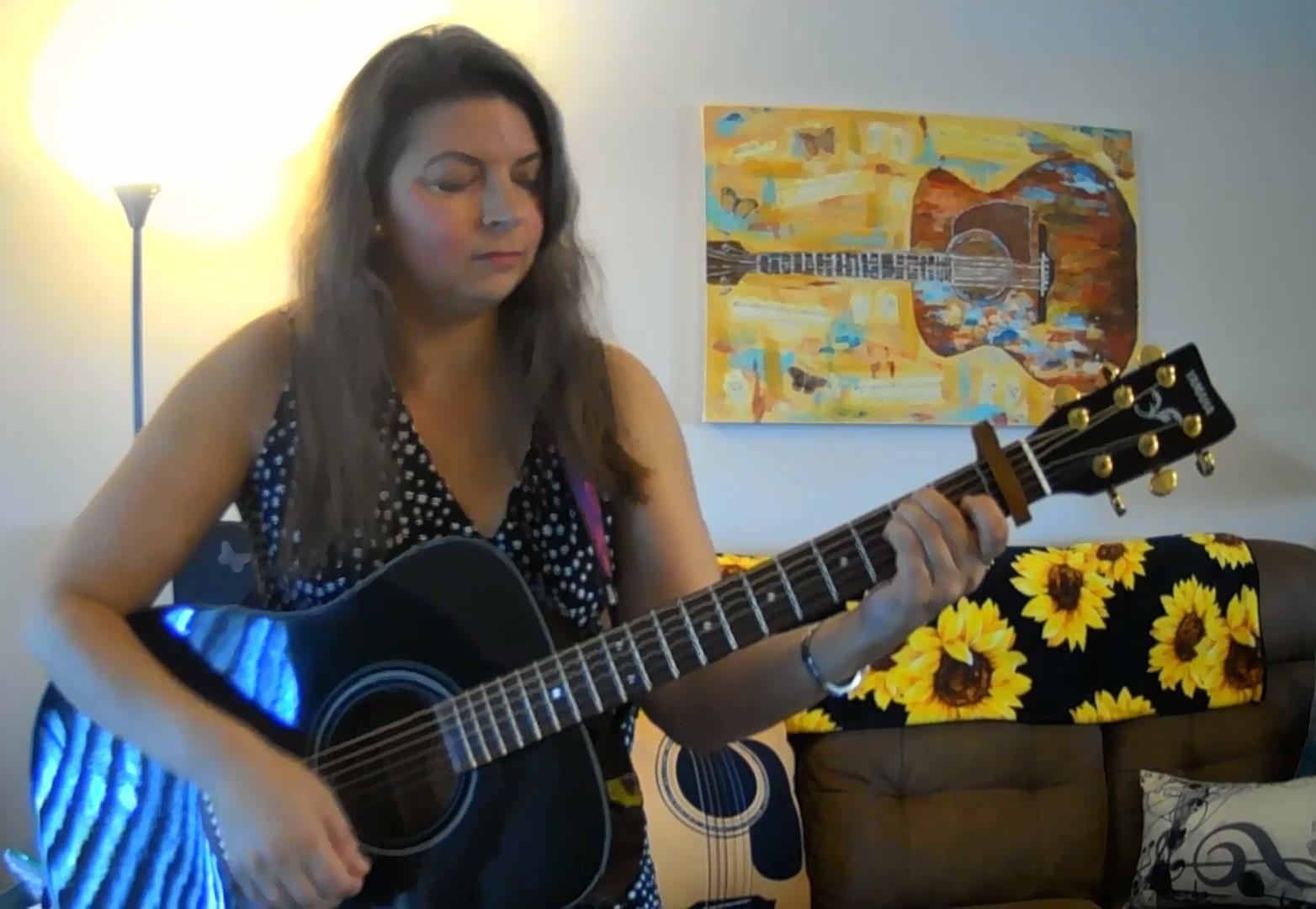 Congrats on the Dread Susan.

You will get a bolder and fuller sound due to the bigger body, however as you discovered the disadvantage of playing a dread. They're a lot of instrument to handle. I'm 5-9 with I'd say average size hands and I would probably have a hard time getting used to one cause I play sitting mostly. My Breedlove is a concert and my next acoustic I'll probably go to a mini or parlour. Standing up as you stated is probably the preffered method with something that big.

I don't know any specific exercises other than probably take a few minutes to do some spider leg warmups before jumping into something. I drive trucks for a living and throughout the day I might be in two or three different ones including my own vehicle and I remember my instructor telling me you should always take a minute to get your mind into the vehicle your driving before you take off. Think about the different subtlies, characteristics and size of each one and let your body make it's adjustments. A few warmups and some scales should get your fingers to adjust to the different size neck and fingerboard. You might find you'll need to stretch a bit more on certain chords though.

Your strumming hand might have the bigger adjustments as your shoulder will be a little higher and your arm has to come out more to accomodate the wider body. Looking at the picture though it seems to fit you pretty good so you might be ok. As long as it's not causing any discomfort I'd say your ok but be very conscious of the right shoulder. I have the same problems when I go from my acoustic to my electric and visa versa. It takes a minute for the hands to get used to the neck and body size. Every guitar is different which is a good thing. I get more impressed when I see performers pickup various size guitars during their shows without missing a beat. Check out some of Sheryl Crows concerts. She goes from Fender Telecaster to full size Gibson Hummingbirds with ease and she's a small lady.

It's all part of our learning process I guess. Like we don't have enough to learn right. lol

I haven't had any discomfort playing but I will keep that right shoulder in mind and make sure it doesnt get too high or become uncomfortable.

I will try the spider legs exercises and maybe come up with an exercise on my own, too. I do seem to need to take a few to acclimate myself when I pick it up, coming from my Ibanez.

I did just get the same strings put on it as my Ibanez and I'm even more in love with the sound! (Di'addario Nickel Bronze Custom Light 11/52.) Someday I will add a parlor to my collection too but I'll definitely enjoy this dread!

I had evey intention of picking up a used case for it today but I ended up walking out with a used soprano ukulele instead. Ha! More fun though! But now I'll have to adjust from my concert and tenor sizes to the soprano of the uke...hahaha! I guess the name of the game is "versatility". :)

Thanks again for the tips... :D

What is the best way to get used to the different styles? (...besides just play, which I'm doing)

Yes, but no. There's a definitive answer!

There are so many different configurations of nut width, neck shape, string spacing and so on. It's endless in a way and as time passes, you develop preferences to those things. Some of it is just feel and some of it is based on physicality of the neck configuration versus your hand.

The 'no' part of my answer is that you just have to get used to it. Since I've got a good few guitars with a variety of neck styles, I do notice when I jump from my Les Paul (and even more, my Gretsch!), to my Telecaster. It fumbles me up a bit when I make that switch. The other day, I went right from the Gretsch, which has a wider neck, to my Tele, with a smaller neck, and fubmled about for a hot minute. So the 'no' answer is that there isn't any real thing that totally helps you get used to it. As long as I've played and as many guitars as I've played and/or owned, it still happens.

The 'yes' part is really this; swap them out regularly. I tend to be a 'my current favored guitar' person and will grab that one for a while and then another from the collection sparks my fancy. It's like when you are all about Mac&Cheese for a week and then you start wanting pizza all the sudden and then that becomes your thing for a while. You get the idea.

Don't do that. I'm guilty but I'm confortable making a quick switch.

So the 'yes' is; swap out often. Get used to going from one to the other. After a time, you don't really think about it.

Thanks! You make excellent points!

I am reallyyyy loving the dread! I do prefer to fingerpick on the Ibanez concert but I think it's just going to take time to get used to the string spacing on the dread...which is why I'm intentionally working on fingerpicking songs right now with it. I will play both regularly though as they are out all the time, ready to be played.