Been working my butt off in the summer heat and felt I owed myself something, so even though I'm more of an acoustic player, I decided to add this horse to the stable.

Yeah it's a Squire, and I told myself I didn't want another "Beginner" guitar. I just couldn't justify the cost of a real Fender though the MIM versions were a close consideration. Maybe later, who knows.

For now I've always loved the simplistic look of the Telecaster and of course that signature twang and for the money you can't beat it. Once I got it tuned properly and buffed out all the past fingerprints off of it, it took a while to get the amp settings right, but once I did she sounded pretty good playing along with Caren Anderson's "Proud Mary" version. Yes CCR and Doobie Brothers was kinda what I had in mind when I bought it.

Maybe later on I'll upgrade the amp, but for right now my $60 Acoustic AV15 works fine. I think having a variety of instruments and styles to play is what keeps this hobby fun. As well as playing of course. 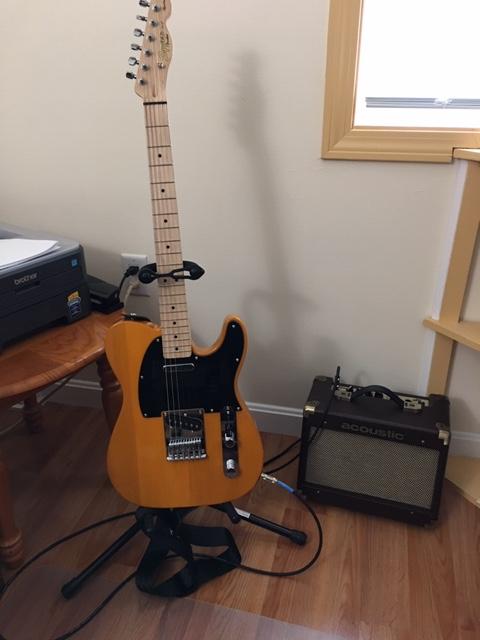 Nice! Everyone should add at least one Tele to their arsenal somewhere along the road.

Squier Affinity Tele lacks little except prestige. Setup properly, they play very nicely IMPE and that of others. [u]Feel[/u] wise, I prefer them to the Classic Vibe. The tuner mechs are about my only gripe. Teles aren't very demanding on tuners for stability, so they work, but ... Affinity's pickups are respectable at the price point, and easily and inexpensively changed to something else if desired.

Affinity Teles feature a lot of positives IMV. Slimmer body for less weight => greater comfort, six saddle bridge for proper intonation, which if desired for that proper Tele twang can easily and inexpensively be swapped back to three double brass barrels, narrower nut and slimmer neck profile with a 12" fingerboard radius.

That is one fine looking tele Moe. Have fun!

Trying to give you a pic of my Squire but the site doesn't appear to like Android.

You will have lots of fun with it.

Saw this some time ago Moe and meant to post it for your enjoyment, overlooked by perpetual distraction in the moment until today.Thought it might be of interest to you with your new Tele?

Guitar and song both motivate me, might you? Learning the latter is intended as 'first cab off the rank' in my 'songs to learn' project for 2021.

Love the elegant Sunburst aesthetic with gloss Maple neck look and pickup tone of that Fender Vintera '50s Telecaster. Unfortunately, along with the good, it comes with a chunky '50s "U" neck and 7½" radius fretboard I'm less fond of (understatement). Fender do do a modern take on it with their Fender Vintera '50s Telecaster Modified with hotter pickups with a soft "V" neck and 9½" radius which would be a better personal fit, but not in that Sunburst.

That girls got chops. She can play. Unfortunately, I can't make mine do that yet, but it's still a keeper.

Funny thing, I had a sunburst Squire about 4 months ago that I bought to replace my broken acoustic at the time. This would have been my only guitar, but once I brought it home while I couldn't stop staring at it's beauty I realized just wasn't far enough in my guitar skills to really make good sounds out if it and I mourned for the sounds of the acoustic so I returned it and thats when I bought my Breedlove Discovery. Pic is in my photo.

So I told myself there would be plenty of time to pick up another electric when the time felt right and of course a Tele sunburst was on my watch list, but believe it or not with 3 music stores within a 10 mile radius of me nobody had one except for Guitar Center, but that was a MIM Fender and it was out of my price range and I'm the kind of guy that when I set out to buy something I want it in my hands then, not later, so I didn't choose to order one.

However, the natural tone wood with black pick guard always screams Telecaster and they had one at another music store for a very affordable price so I went for it. It's the quintessential Country twanger IMHO. To quote a luthier I watched on Youtube restore a vintage 50's model "Now It looks like it's been in a few bar fights". Now that's a Tele. Anders plays one in the country music style section and I love the looks and sounds of it.

congratulations on your new telecaster! I'm a huge fan and love mine (an old MIJ fender from the mid-1990s) and a parts-caster thinline.

I love that I can cover many genres with the tele-including jazz and, of course, blues.

Thanks Sasha. When you get a chance throw a pic up so we can all see your guitar. 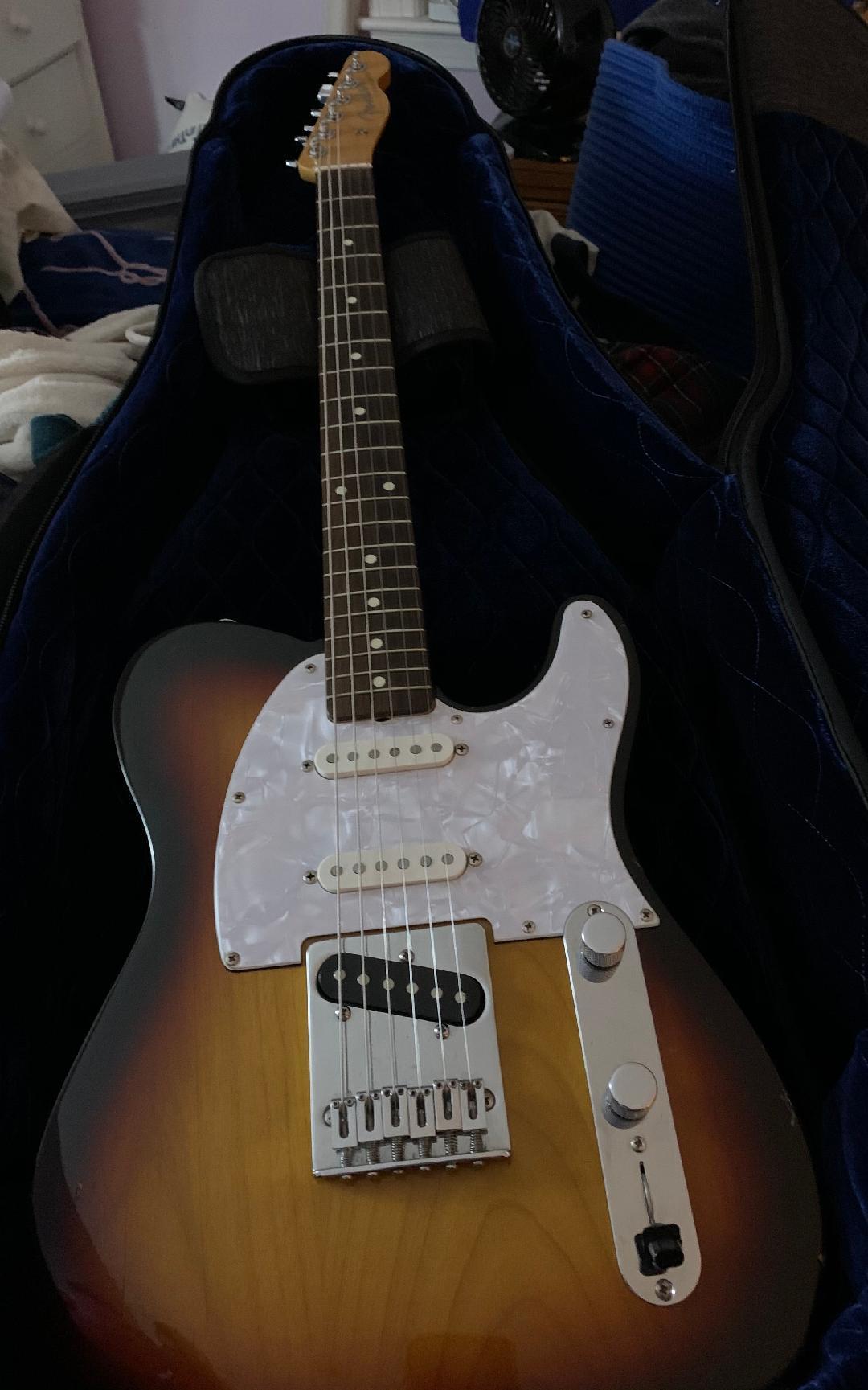 Interesting Tele config. When you want a HT Strat with a Tele body!

String through six saddle flat plate too. And and obverse selector switch location. Did it come fitted like that in that model, or did someone reverse the switchplate?

Gee, I better post a pic of mine, we are going to have a Tele club going on here soon lol.

She is a beauty Sasha.

Here is one of my two Teles. This one is my favourite. Not Squier or Fender, but Cort, with player ergonomics & appointments preferred by[u] me[/u]. Mine is the Blue Ice Metallic one. Link provides better pix than a quick ad hoc smartphone image taken in poor lighting.

waiting on yours William! manxcat, cort makes a great guitar! Love the look and sound!

Mine is a MIJ 50th Anniversary Tele Delux. It has the strat cutout, but maintained maintained much of the tele shape and sound. I can get the strat sound out of it, if I so desire. I will likely be upgrading the neck pickup at some point. I tried it out on a whim as I was looking at more traditional teles. I played it and fell in love with the sound and feel. Able to get the tele sound and then some.

We should start a tele owners thread here. Not sure if I can point out, there is also a dedication forum for all things tele. It is TDPRI forum (telecaster discussion page reissue). although, it would also be fun to have a subforum for us telecaster fans.

This is my little girl Sasha. I thought she was made in China, but turns out to be Indonesia 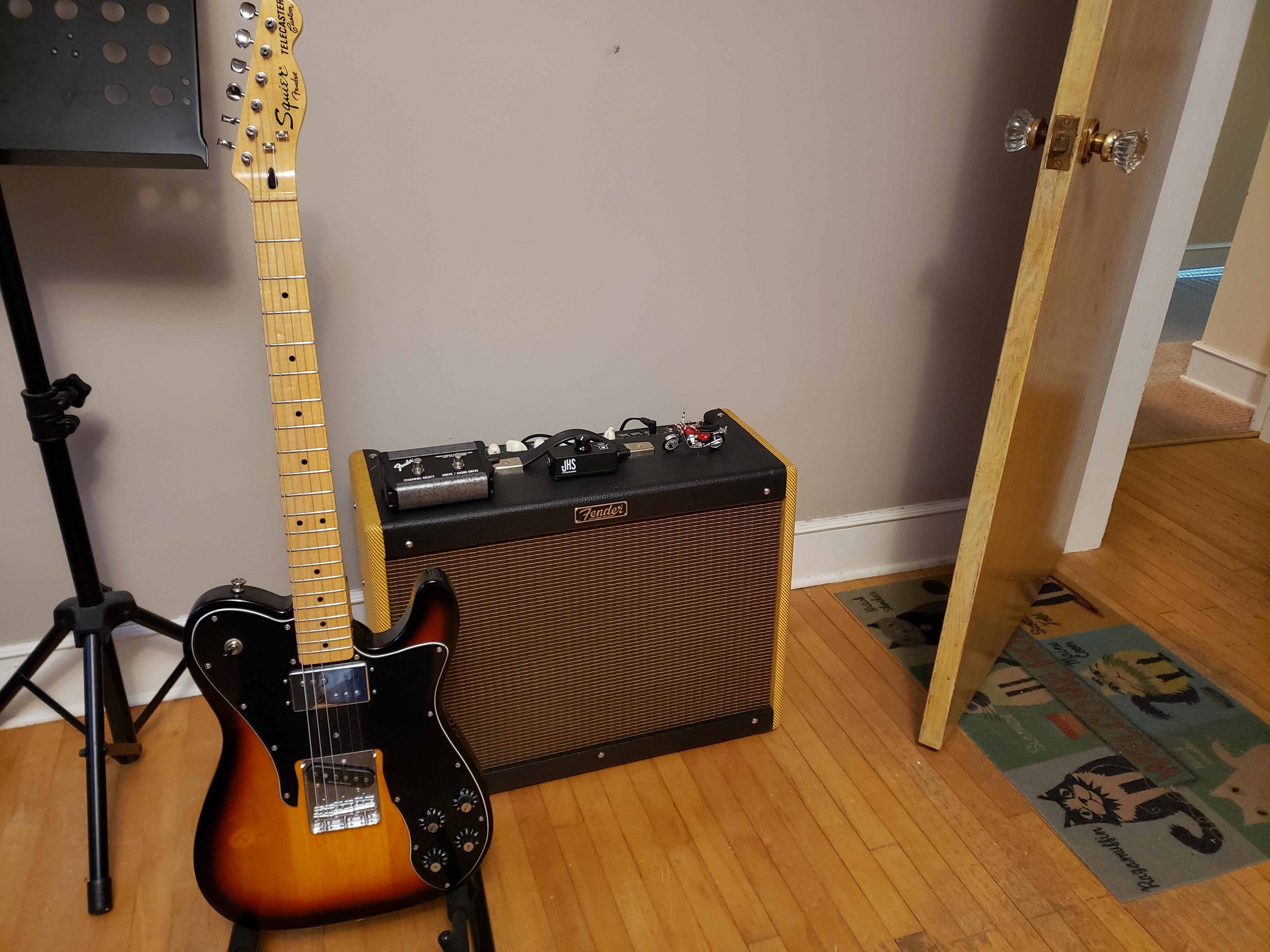 Nice looking delux! I love the blackguard on the burst.

This is my little girl Sasha. I thought she was made in China, but turns out to be Indonesia

Nice William, very nice and Manxcat I love the contours on yours. Very interesting.

I have the same Squire Affinity Tele you have mjgodin. I got it for Father's Day. I like it but right now it is spending more time in the case than being played. I am working on Anders Acoustic Course Part 1 which I am almost done with. So my Yamaha FS800 has gotten alot more playing time than the Tele. That will change thouugh soon as I plan to start on the rock or the country course in the coming months.

My next guitar purchase I am looking at is probably going to be a Squire Bullet HT Stratocaster. Seasons greetings everyone!!

Congrats deepiper. Been playing the acoustic all morning and now time to break out the Twanger and work on lead playing. It's been tough going to say the least, but I'll stick with it. I am currently plugging mine into an Acoustic (Brand and type) amplifier so I'm not getting the true Tele sound out of it, yet that might change down the road.