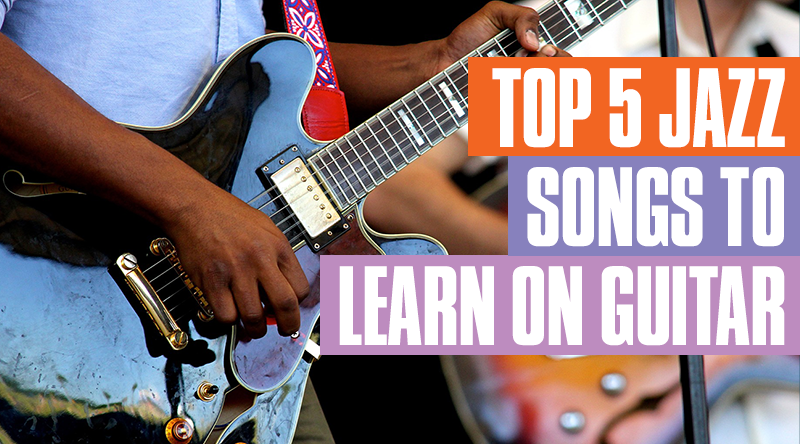 There are a number of considerations to keep in mind when putting together a list like this. Guitars are tuned in such a way that some tunes lend themselves to the instrument while others do not. What I will suggest here will be tunes that offer a variety of challenges for the instrument. Some challenges you might encounter are challenging chord progressions, modulations to different keys, and common forms. It is important that you are able to tackle these things from the early stages and you will find that many tunes contain much of the same material, only rearranged. Make an effort to learn these tunes in more than one key. Do a bit of homework and find out the most common keys for each tune. Really, I would suggest learning every tune in every key, but that suggestion is, perhaps, for more advanced players.

“Autumn Leaves”, originally composed by Hungarian-French composer Joseph Kosma, is often one of the very first tunes players learn when they are getting into jazz. It presents a few of your first basic hurdles. One of these is learning to play over the famous ii V I progression. This progression is all over almost every single jazz standard and it is very important to learn how to deal with it early on. Another big one is the MINOR ii V I progression. Oftentimes, beginners tend to struggle with this progression as it can be a bit awkward. The first chord in the progression is a minor7b5 chord and beginners don’t always have a good grasp of how to deal with these, the dominant chord is also tricky as it is an altered dominant chord which requires a bit of study, but the minor tonic chord is not quite as difficult to handle. This tune is most commonly played in the keys of G minor and E minor.

“Tenor Madness” is a standard jazz blues in Bb composed by the great Sonny Rollins and it is a great one to know. Mostly, I am recommending this because anyone getting into jazz must know how to handle the blues. There are so many tunes that are based on this same progression that it is virtually impossible to not encounter it on a gig or at a jam session. This is not like your standard blues or rock blues and there are some added changes involved. Additionally, it gives you a shot at the standard iii vi ii V turnaround. This turnaround is everywhere in jazz as well and you should learn to handle it early!

Here is another great one to learn early on. “Blue Bossa” composed by Kenny Dorham, gives you more of those tricky minor ii V progressions but also introduces something we have not really discussed yet: modulation. The tune is mostly in C minor, but it briefly modulates to the key of Db major before returning back to C minor. Learning to switch keys over just a few bars is an important skill to develop early. Many jazz standards cycle through several keys over the course of one tune. Another concept this tune introduces is playing over a Latin groove. While it is not really considered a “proper” bossa, it will provide something new for you to tackle rhythmically.

Herbie Hancock’s “Watermelon Man” is a great one to learn early on for a number reason. For one, much like “Blue Bossa”, it gives you a different type of groove to tackle beyond straight-ahead swing. The original recording takes a sort of funky/Latin hard bop approach. It was re-recorded with the Headhunters later on, but I tend to prefer the original. Another interesting feature to note about this tune is that it introduces us to what is often known as a 16-bar blues. This can trick beginners sometimes because they are expecting the turnaround to come earlier than it does. This tune is mostly common played in F.

Lastly, I thought it would be a good idea to include “Oleo” by Sonny Rollins in this list. This tune uses a popular chord progression based on the song, “I’ve Got Rhythm”. Much like the blues in all of its varieties, there are so many tunes based on this progression that it is absolutely imperative that you become proficient with it. If you have a gig or attend enough jam sessions, you will definitely encounter it more than one time. Let’s talk about a few of the things that you will encounter here. For one, the I vi ii V progression is used in many standards and the same material you learned for iii vi ii V progressions can be applied here. The reason this works is because the I and iii chords are closely related. Next, you also have the IV to IV- progression. This is a popular modulation, not only in jazz, but in all music. A few other jazz standards that make use of this modulation are “All the Things You Are” and “Just Friends”. Lastly, the bridge goes through the ever-popular dominant cycle. Being able to play through this progression is important for all of the same reasons as everything else here: you will encounter it often!

Much like these tunes, there are many more that all have a different kind of lesson written into them. I encourage you to learn as many different tunes as possible and really dig into the nuts and bolts of what makes each section tick. Take four bars of a tune at a time and study it. As guitar players, we are expected to be able to handle many different aspects of a tune at the drop of a dime. That means that you should be able to play a full solo arrangement, bass lines, comp chords, and improvise over a tune. It may sound like a lot, but for me, that is what really makes this whole jazz guitar thing fun. There is always so much to learn.

Marc-Andre Seguin is the webmaster, “brains behind” and teacher on JazzGuitarLessons.net, the #1 online resource for learning how to play jazz guitar. He draws from his experience both as a professional jazz guitarist and professional jazz teacher to help thousands of people from all around the world learn the craft of jazz guitar.