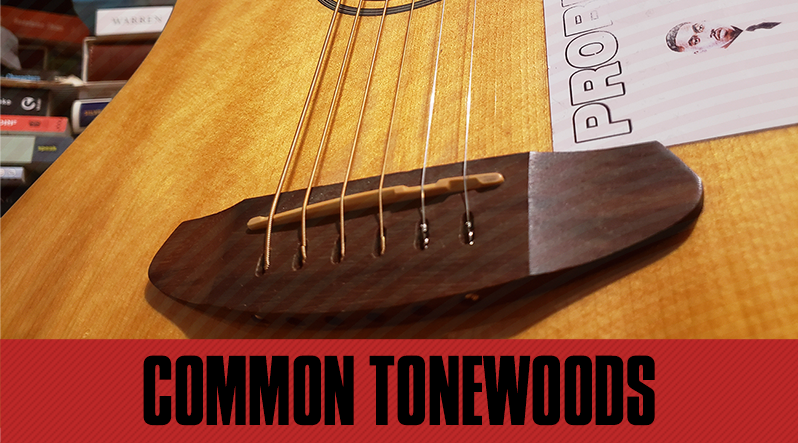 For the purpose of this blog post, we'll focus on the main tonewoods used for building acoustic guitars. While we won't dive into all the different types of exotic tonewoods, these are the ones you're most likely to come across.

What do Tonewoods do?

When an acoustic guitar is strummed, the vibrations from the strings radiate from the bridge of the guitar to the very tip of the headstock. These vibrations shake the wood, and jump all around the sound hole, which then produces the beautiful tones we hear when we strum chords, or play individual notes.

Different woods will give the guitar different sound qualities. Some woods are more porous, or lighter, while others are heavier, or more dense. The tree that the wood comes from also contributes to variations in the wood as well. For example, if you use two blocks of wood, that were cut from the same tree, those two pieces of wood could potentially provide different tonal traits.

Before we get into the different types of wood, it’s important to make some quick notes on laminated woods. These types of woods are thin pieces of wood that are stuck together. They’re usually found in more affordable guitars. The alternative is solid wood, which are thicker pieces of wood that usually sounds a bit better since there are no extra materials or layers to interfere with the sound.

Tonewood for the Back and Sides

This type of wood is supposed to give the guitar a rounded, and potentially warm sound, depending on the cut, but it’s also strong and sturdy. Mahogany is used in a lot of Gibsons, and other acoustics and electrics. Using this wood could make the guitar a little heavy as well.

It’s probably the most popular tonewood since just about every guitar manufacturer uses this. The majority of guitars in the past have used Brazilian Rosewood, so much that the world’s reserve or this wood has depleted to the point that it's practically endangered according to the Convention on International Trade in Endangered Species of Flora and Fauna (CITES). It’s known for its dark colors, its highly resonant characteristics. Musicians and luthiers would say that this tonewood has the most balanced tone, and it’s certainly one of the most expensive since guitars with this wood are not mass-produced as much as they once were.

There’s also another version of Rosewood called Indian Rosewood and it’s very similar to the Brazilian except it’s a bit darker in color and may produce a thicker tone.

This wood is very similar to mahogany and is also used as a top wood and a neck wood. The biggest difference between this and mahogany is that it may sound a little brighter, or the treble will be a bit more pronounced. Sapele is also a bit harder than mahogany which could impact the tonal qualities.

The Hawaiian tonewood! Koa is usually put into special edition guitars because it can be pricey. It’s known for its beautiful colors and bright sounding tone. Some builders love this wood for it’s balanced properties, fitting somewhere between the crispy sonic qualities of rosewood and the warm characteristics of mahogany. Some also say that koa ages and sounds better over time.