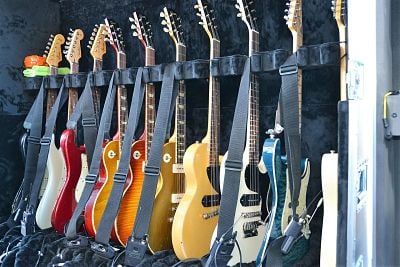 In a world dominated by Les Paul knockoffs and endless variations on the strat and tele designs, it’s natural to feel like the guitar will remain largely unchanged until the end of time. After all, there’s nothing left to take away or add to a guitar that can make it any better, right?

Thunder Eagle guitars design custom guitars, creating some of the weirdest and wonderful looking instruments around. It’s primarily the work of Jeff Ritzmann, who’s taken his experience as an artist and combined it with a passion for guitars to make some truly unique guitars that are both beautiful and sound amazing. Their guitars have been found in the hands of many celebrities, and they’ve gained a strong following in recent years, but despite this, and appearing in Guitar World Magazine, Thunder Eagle Guitars remains a relatively low key brand.

Much like Thunder Eagle Guitars, IKON Customs are a US based brand making a name for themselves on the metal scene as creators of outlandish and beautiful guitars. They use proprietary resin to craft designs that wouldn’t look out of place at a black mass, and their customers rave about the inspirational results.

All guitarists will be familiar with the struggles of packing up seemingly endless amounts of gear and dragging it around from home to gig and back again over and over. If you’re not quite famous enough to hire on a few hands to help out with the labor, Stewart Guitars have developed some extremely useful designs that make guitars much more travel friendly. Their primary innovation is the ‘clip-joint’, which allows the neck to be easily removed. They combined this with a sheath on the back of the guitar for safe storage, with the added benefit of allowing you to imitate a samurai whilst you’re on stage.

Blackbird builds guitars built with the hazards of traveling in mind. Unsatisfied with the weakness of travel guitars, they developed incredibly strong and weather-resistant guitars that can take any amount of punishment. They favour single-piece bodies, and their carbon fibre construction grants them a level of indestructibility rarely found in musical instruments. For guitarists who are playing in humid areas, or are paranoid about the damage caused to their instruments by uncaring flight crews, a Blackbird guitar has you covered.

They’ve also made some stunning innovations in resonance too. In 2009 they appeared on guitarplayer.com with their Super-OM design that featured asymmetrical designs, an offset sound hole, a hollow neck and multiple cutaways for playing comfort, plus the aforementioned carbon fibre construction.

The main force behind the harp guitar design at this moment. Their most famous user is likely Andy McKee, who took the internet by storm with his unusual percussive playing styling and use of the bizarre, yet beautiful instrument.

Smart technology has changed the way we live, and for guitarists it’s no different. Most of the big brands have been slow to adapt to these changes, utilizing the power of the now ubiquitous smartphone only in the margins of their technology. Fusion Guitar have taken the opposite approach, and have made the most common place of items, the iPhone, one of their central components, and the results are unbelievable. They integrated the phone by turning it into a battery, modelling amp, speaker and recording studio - without the need for any cables.

See it in action here:

The only real possible upgrade at this point for travel guitars would be to combine it with the incredible strength of a Blackbird carbon fibre construction, and we’d be set to take a guitar anywhere in the world without fear of damage and still have access to all the tools we’ve come to rely on for electrics.

Although there are a few other guitar brands that are trying to bring about a smart revolution for their instruments, none have done it in such an elegant fashion that fits so seamlessly with modern living. It’s also one of the few smart guitars that don't look like a novelty item that’s just for show, and instead seems like a genuine progression of the guitar.

Although not a manufacturer of guitars, Tronical have unleashed one of the biggest game changers guitarists are going to see for a while in terms of what they are capable of doing in a live situation.

The Tronical Tune device auto corrects the tuning of a guitar, meaning that it will never go out of tune whilst the battery is charged. It is easily fixed to most headstocks, and also allows you to change from one tuning to another within a few seconds. Accomplishing this in a live playing scenario is technically possible, but doing it in the middle of a song without having to worry about getting it exactly right is quite a challenge.

The Tronical Tune has been picked up by a few legendary players such as Steve Vai.

Like Tronical, Pitch Key have developed a method of quickly altering tunings whilst in the middle of playing. The difference between their approach is in the execution of the idea. With a Pitch Key, a screw like device is fixed to a guitar string, which changes the string to a different pitch when fully turned. The most common application is being able to go from standard to drop D tuning in less than two seconds, and unlike the Tronical it doesn’t rely on battery power, and it’s also much cheaper.

Babicz most creative addition to the Guitar is the split bridge. It allows the bridge to be easily repositioned, allowing for perfect intonation. Furthermore, the bridge will never need to be repaired due to the seal between it and the guitar breaking, and it reduces stress on the body of the guitar by altering the way the strings apply pressure to the body.

Hufschmid Guitars are the work of a single master artisan at the peak of his game. Although the guitars are works of art in themselves and sound amazing, the real innovation is the unique humbucker pickup design. They’re solid cast resin, coated in a patented photoluminescent pigment that causes them to glow in the dark, uses military grade capacitors and high quality pots with an engraved design. They’re only available as part of a Hufschmid guitar, so you won’t be able to get hold of them separately as an aftermarket pickup.

Olaf Diegel, the force behind Odd Guitars, is a professor of Mechatronic and a leading expert on 3D printing. He combined his knowledge with a passion for music and started creating some of the most intricately design guitar bodies in the world. Every guitar is one of a kind, and full of detail that will take a long time to fully appreciate. They are true works of art derived from cutting edge technology, precision engineering, and deep creativity.

So there we have it. 11 of the most innovative guitar brands on the planet today. One thing is clear: innovation in guitar manufacturing has never been in a better place. Which one do you fancy trying out?

Ged Richardson runs his own music blog at Zinginstruments.com and has a special thing for guitars in general. Check out his stuff over there.