Boiled down to it's core or essence, the Bo Diddley beat is a 5 hit clave figure. Traced back to it's African roots, this rhythm became one of the cornerstones in rock n roll as well as pop music and continues to influence music to this day.

But the 5 hits are just the bare bones of the beat. Bo added a lot to these 5 hits and never really liked to play it the same way. He would play around with the rhythmic phrasing in the beat Bo Diddley was not into technique as much as he was in to the groove and the vibe of the song. And there are lots and lots of variations being played at all times so remember that it's very much a rhythmic jam based on the 5 hit clave and a lot of adding the extra string scratching as well as some added chord stabs.

So to achieve all this rhythmic bliss there are a couple things we need to consider. Let's start with the left hand. We have our capo on the 3rd fret, and we're playing what looks like an open E chord but since we're placing the capo here on the 3rd fret it'll be like a G bar chord.

And let's take a quick look at how the left hand is interacting with the beat as you see we're going to be employing some left handed muting in between the rhythm hits. Another thing that you may have noticed is my thumb, and I'm slightly muting the low E string with my thumb.

For the right hand you're in for a workout. You'll be playing a lot of notes in your right hand and it's is crucial that you're spot on with the groove. Otherwise it's just not going to sound right. And, just because there's a lot of rhythmic jamming, it doesn't mean that you can be loose and mess with the rhythm section. Listen to any Bo Diddley recording or live performance. His rhythm playing is really impeccable. So remember to keep your wrist loose and don't tense up and just keep the right hand going. 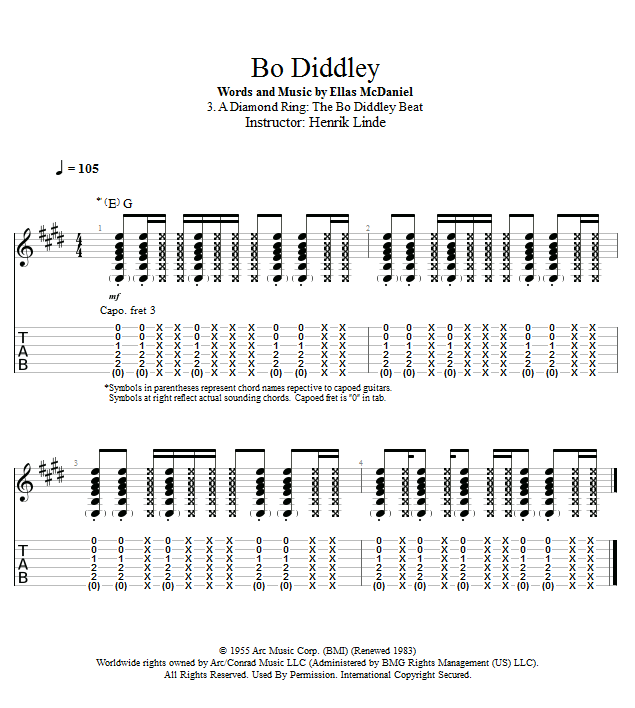