The idea behind sweep picking is to get a lot of harmonic or melodic information (notes) into a relatively small amount of time. This technique is called "sweeping" because you pick ("sweep") across the strings in one continuous motion, in one direction. This technique can and usually does also involve slightly muting the strings with your right hand after you pick any given note to get a clean articulation. The left hand must also follow the picking motion closely. In this tutorial series we will look at the basic mechanics of the technique from a beginner's perspective. Then we can get into basic applications and eventually begin to prepare for the more advanced and complicated "shred sweeping".

In this lesson we use an A major chord in a triad form on three adjacent strings. Notice that the hardest part at first will be co-ordinating the "rolling" of your fretting hand to match precisely when your picking hand sweeps across any given string. You want to have a finger holding down a note on a string just long enough for the pick to sweep across it. Then, slightly release the pressure so that the string is muted and not ringing any longer. Your finger should still be touching the string but not pressing it down hard enough to let the note continue to ring.

You should also be careful with how much muting you do with your picking hand. Try different amounts of pressure from light palm muting to medium, then to heavy. The idea here is to clearly and cleanly isolate one string at a time in order to make only one note at a time sound. As soon as one note sounds, it is stopped and the next note sounds! And so on, until the end of the sweep picking passage. 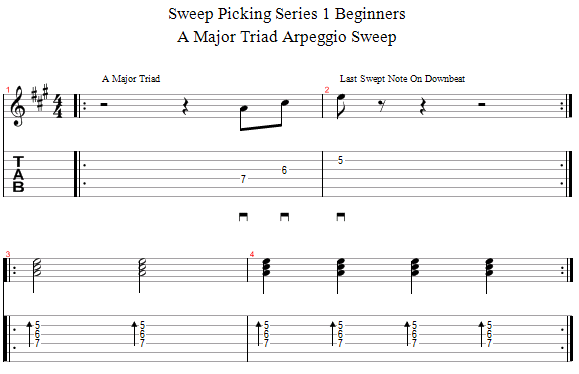