In this third tutorial we will focus only on targeting chord tones in order to learn more ways to spice up the minor pentatonic "box" blues shape with notes from the major scales. For these example exercises we will use the A minor pentatonic scale and a 12 bar blues form in A major.

The lessons in this series are based on a lot of the ideas we already learned in the previous series "Major Notes in Pentatonic Minor" which you can find here:


All the important ideas behind the licks in this series are covered there. So if something doesn't make sense in this tutorial, go back to that first one. Check that stuff out and then you will be better prepared to understand the ideas in this one.

In this first lesson I show how to use only one chord shape (a kind of moveable barred F chord) and move it up and down the fretboard in order to play all three chords of our 12 bar blues in A; A (I), D (IV) and E (V).

Instead of strumming all the notes together, like chords are usually played, we will pick the notes of the chord out one at a time, one after the other. This creates a little melodic phrase completely out of chord tones. Next we add a chromatic approach note, the minor 3rd from the pentatonic minor scale. We play it right before the major 3rd and this creates a very characteristic bluesy sound!

So, our lick is made of the following scale degrees: root note, minor 3rd, major 3rd, 5th, root note an octave higher.

We move it up and down the strings to play all three chords, learn to play them at the right time as the chords in the 12 bar blues change, and we are ready to go! 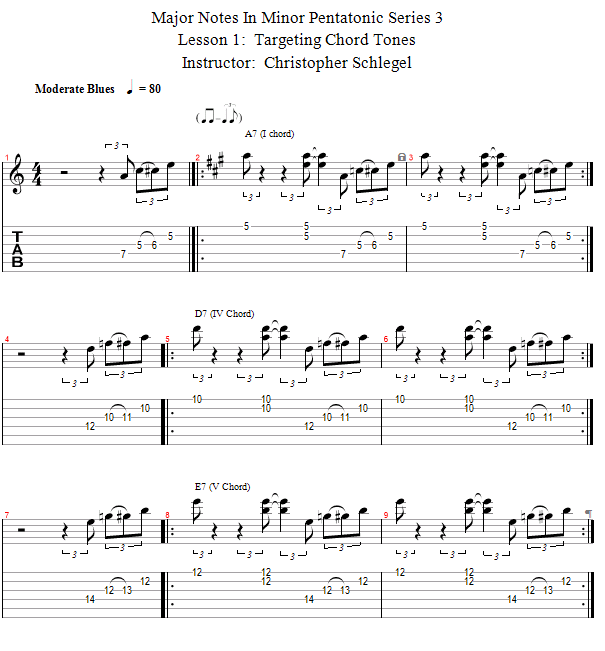