Now put them in alphabetical order: a, b, c, d, e, f, g-sharp, a. Notice that is mostly an A minor scale. This is essentially what a key is. What "key a song is in" is which minor (or major) scale most of the notes in the song belong to. We can and will use the natural A minor scale to solo over the A minor and D minor chords. But when the E7 chord comes along, we alter the scale to reflect that chord. That leads to what is known as an A harmonic minor scale.

If the notes of all the chords do not all fit in one scale then look for a major or minor scale that contains most of them. Then look for the chord(s) that make for the exception. This is frequently a modulation chord. In this case the E7 is the "odd chord out"; it is the modulation chord that alters our A natural scale to harmonic minor (the 7th scale degree "g" is not a minor 7th when the E7 chord happens; it is a "g-sharp" instead). Most of the A minor scale will work fine, we simply need to alter that one scale note to reflect the E7 chord. When the A minor and D minor chords return, we simply switch back to the A natural scale.

From the perspective of functional harmony, the E7 chord is functioning as the complete Dominant (V7) of the A minor chord. If we only had a normal E minor chord, we would have only notes from the A natural minor scale, the E minor chord being (e, g, b). But the note "g-sharp" from the E7 chord adds a lot of character because it's a leading tone, which is a note one half-step below the root note of the scale.

The note g-sharp "leads" to the note root a, therefore it's called a leading tone.

So, the first thing we need to do is be able to confidently play the A minor scale in order to play the licks we'll build in this tutorial. Let's work on that now!

We're going to use the A minor scale in two octaves in a lower register. And an octave higher in the higher register. So, let's practice it with a backing track. Don't worry if you can't play it all right away or very well. Right now we just want to start playing it in 2 different places on the fretboard to get used to the sound, feel and look of it. 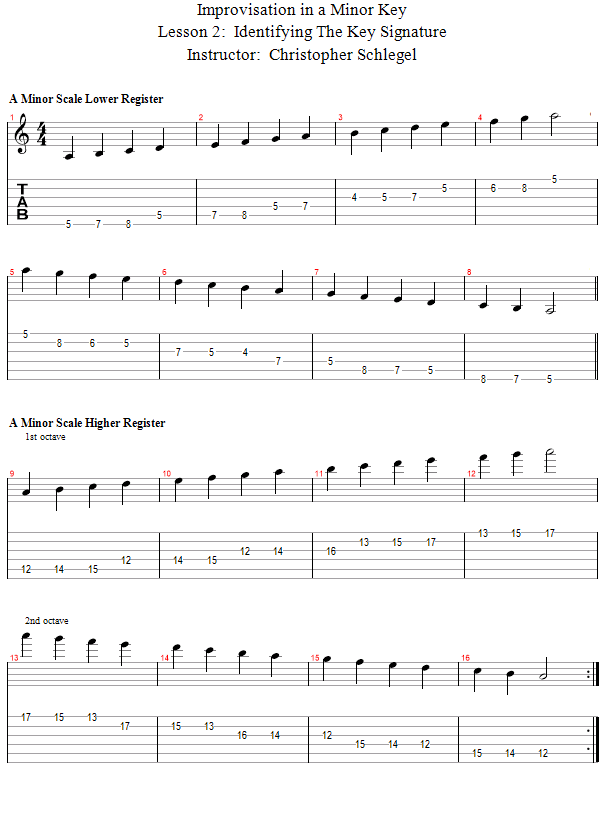