Looking for some Martin Advice

I think I have posted on here about my next guitar probably is going to be a PRS McCarty 594. But, if I look at my guitar stable, where I have a recognizable deficiency is in the acoustic side. I'm an electric guy first and I'm fortunate I've got a handful of nice electric guitars that reflect that. But, if I post a NGD thread anytime soon, it really should be for an acoustic.

Should that happen, until now, I have always known that thread would announce a new Martin 000-EC. I had the opportunity to play one at a local store here and fell in love. But recently I watched a guy with Alamo Guitars discuss the Martin 000-15M series. He said something to the effect it is not just the best value in the Martin line but maybe the best value of any acoustic guitar out there right now. He also raved about the mahogany for blues and how all the old blues guys played 000 size mahogany guitars. When I think about those guys and their guitars, he's right! 000 or auditorium size mahogany guitars! Sweetwater also says "the 000-15M may be one of the best values you'll find".

There is also a, the term is "artist clinician for C.F. Martin Guitar & Co", named Corey Congilio that I actually met at a "road show" for Martin here in Omaha. He is the one that had largely talked me into the Clapton. But he also, on a YT video about Martin guitars, raved about the 15M both for the tone of the mahogany for acoustic blues and the value.

So.........what say you Martin experts? Anyone here, hopefully, familiar with both the EC and the 15M series? To be clear, I'm not saying the 15M is my fallback. It seems like it is a great guitar in its own right. If not, I'm in a position to go forward with the EC. But if the 15M will serve me well for blues I can take the difference and apply it to the PRS electric soon. (yeah, I've got a problem ?)

Any thoughts or suggestions are appreciated.

You should get the Martin you fell in love with. You can get good blues sound out of a Sitka top. If you have the chance to try out both models in person, and you fall in love with the all hog-then get that one. [br][br]

I ended up with an acoustic I did not plan on getting (was going for a Martin 00-15) but fell in love with the Guild M20. It sounded right to my ears and felt good in the hands.

[br]I know this is not a definitive answer, but I do t think you can go wrong with either Martin. Blues has also been played on Sitka spruce top acoustics.

No, @Sasha-B it isn't a definititve answer, but there probably isn't one. At least you responded. which is more than I can say for every one else.

Unfortunately I can't try them out in person. There are none locally.

Thank you for responding.

I own both a 12 fret with Sitka top and rosewood back and sides (solid wood) and the guild m20 is all hog. Both give me the blues sound I want-the 12 fret is brighter.

you should pose this question on in the Acoustic Guitar forum. It's a great group and knowledgeable people. It's free to join as well. [br][br]

Thanks Sasha. I'll check it out.

It's a friendly group and knowledgeable. I think you'd enjoy the topics and discussions.

I am not starting a NGD thread here. It seems those are not popular here like other forums. But I wanted to bring you up-to-date.

I did not get the Martin 000-EC. I was about to order it online from Reverb and take a chance I got a good one. But at the last minute I decided to check out my favorite local store and just glance. He said I just got this in and you have to take a look. He showed me a Martin M-36. You know how we often hear "Buy the guitar that speaks to you!"? Well it spoke to me. I've had it home for a while now and I just love it. It is similar size as a dreadnaught (which I didn't want) but shallower. Very comfortable! And sounds great and so playable. And cheaper! 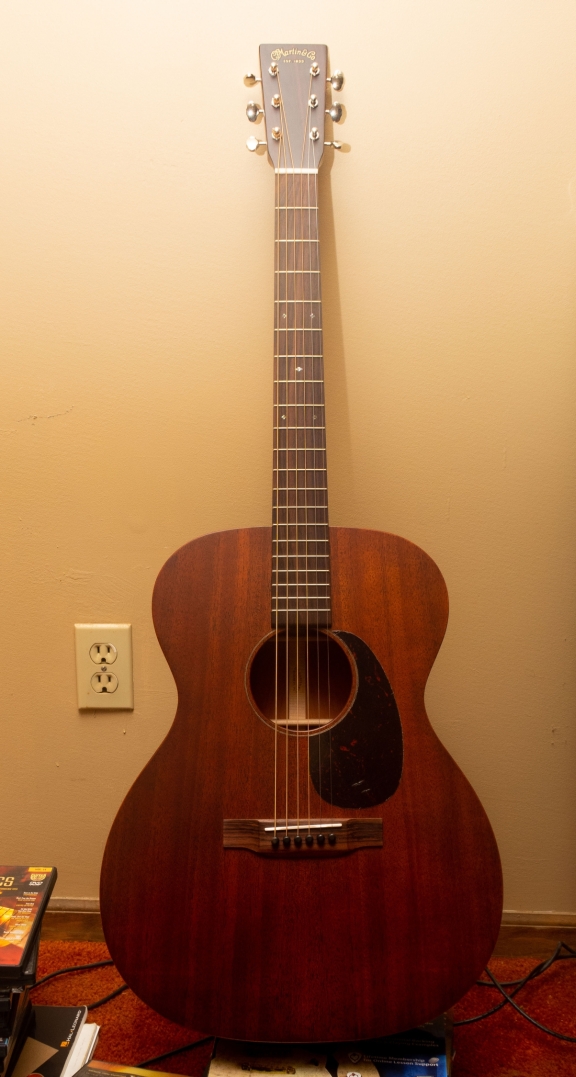 I am so very fortunate to have two really nice acoustics to work blues on. Which is exactly what I'm going to do!

That's great! What a gorgeous guitar! I did the same this weekend. Ended up trading in my 12 fret after feeling like this Iris ch was meant to be with me.

That's great! What a gorgeous guitar! I did the same this weekend. Ended up trading in my 12 fret after feeling like this Iris ch was meant to be with me.

Iris is a guitar company based in Vermont. Only been around since 2019. CH is the model name. For some reason, I'm having a problem uploading a photo. It's a very different guitar than your gorgeous Martin. [br][br]

I'll try from my computer tomorrow. I'm on my phone at the moment.

How's your new Martin? It's a beauty! I love the craftsmanship on your Martins.

Loving them. I'm an electric guy. Iknew I needed an acoustic as I said in my OP. But since getting the M-36 all I have been playing is acoustic. So it filled the void but, perhaps more importantly, it has opened my eyes to the world of acoustic. Or given me a better appreciation is perhaps the way to say it.

I hope you can get the photo posted. I want to see your new beauty. Besides, apparently you and I are the only ones interested in discussing acoustics!!!!

ps. I had to load images to a photo sharing site then link that way. I use Imgur.

hopefully I did this correctly and you can see the photos. Excuse the amateurish pictures. Just wanted to take them.

It would be nice to have others join in our conversation.

Not amateurish at all. Really nice looking guitar. I had never heard of Iris.

Iris has not been around that long. 3 or 4 years, maybe? The owner and lead luthier worked for Froggy Bottom guitars at one point.

Originally Posted by: matonanjin2[p]Not amateurish at all. Really nice looking guitar. I had never heard of Iris.