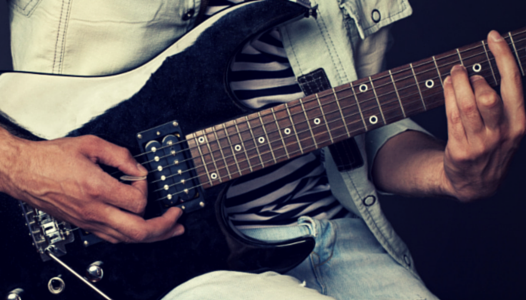 Ever been in awe of a guitarist who blazes through a solo so effortlessly it seems the music is flowing right through them? You may have wondered how it is they can play so fluently without thinking about each and every note and which finger goes where on what string. These guitarists are in "the zone." And it's called muscle memory.

Muscle memory is built through repetition over time. It is an acquired skill that has been practiced so long it seems innate, like riding a bicycle or tying your shoelaces. If you struggle to hit the right notes whenever you take your eyes off your hands, give the following eight tips a try to help beef up your muscle memory:

1. (Lots of) Practice Makes Perfect. The more you do something, the quicker your brain can instruct your muscles to carry out a task. Take typing, for instance. We all start out with the hunt-and-peck method but in time, we can lay down an unconscious stream of letters, words and symbols. Learning to play guitar without watching your fingers' every move utilizes the same process. You develop a "feel" for playing by playing a lot. Practice not only makes perfect, it makes permanent.

2. Learn slow, forget slow. Don't try to learn riffs at full speed. Just like any exercise regimen, building muscle memory requires slow repetition. Get used to endless, mindless repetition, preferably with a metronome, cycling riffs and chord progressions and entire songs over and over at low speed until you can play them cleanly. Only then, gradually increase the tempo.

3. Long vs. short practice sessions. Understand that there is an optimal amount of time to spend on any given tune or technical problem per practice session. You learn something more thoroughly by coming back to it many times instead of trying to crunch too much in a marathon session every other week. Practice daily and twice a day when possible, though in shorter sessions. You should stop your practice before you start to tire and get sloppy in your execution because…

4. Muscle memory doesn't discriminate between good and bad habits. Muscles remember mistakes in the exact same way they remember correct technique, so be sure to get it right. When you repeat mistakes again and again, you build a muscle memory with those mistakes, which makes them even harder to overcome later. Let me rephrase: Perfect practice makes perfect.

5. Break songs up into bite-sized pieces. Don't rush to learn an entire piece of music in one sitting. Break the song up into manageable parts and concentrate on learning one part really well. Practice that section slowly, watching your hands, until you've got it down pat, then speed it up little by little until you can play at full speed without watching your hands. Work on the next part the same way, then put the two parts together and work on them together in the same practice session. Add one song part at time after you have mastered it, just like you are stringing beads.

7. Learning strum patterns is groovy. You don't have to be quite so militant about avoiding mistakes when learning new rhythms, like a new strum pattern. While simplifying and slowing down is helpful, learning rhythms also involves the mysterious process of "getting into the groove." It demands that you loosen up, stop worrying about sounding bad, and try to feel the music. Once you get the strum pattern down, you'll have plenty of time to obliterate the mistakes from your muscle memory as you strum that pattern over and over and over and over.

8. Be patient. Building muscle memory is a process that demands patience and persistence. The more you try to rush the process, the greater your chances are that bad habits and ultimately frustration will set in. Many of our most gifted players have been developing their muscle memory since they first picked up the guitar at an early age. Some researchers believe it takes between 1000 and 30,000 repetitions of an activity for it to become second nature to you. When building muscle memory, commit to it for the long haul. Your ability as a player will grow in leaps and bounds for it.

Great blog posting to learn. I am more like searching to improve muscle memory for tennis players. Thanks Martin Diaz Alvarez

My goal was to try to master the guitar and be like Jeff Beck as a great guitarist to aspire to, The only problem with that is that Jeff Beck being one of the top 3 greatest guitarist to Ever pick up a guitar ,and trying to live up to his standard ,will create many years Of let down. When even a moderate player pick a goal to play maybe a few of a master guitarist songs eventually . I am a man of reason and know myself or no one I know Is in the great Jeff Becks class !! Think with modesty and reason.

Im a beginner ,only knom some chords