I was trying to get the intonation of my electric just right. The first method I tried was to adjust the saddle so that the open string and the string fretted at the 12th fret were the same. I was using a Snark tuner for this. But I was having some problems that seemed to boil down to the fact that a fretted string is stretched, so that even if the string is divided perfectly in half, the fretted string is going to bias the notes to play a bit sharp. So then I was thinking that maybe I should adjust the saddle such that the string sounds the same note (an octave apart) when fretted at the 1st and 13 fret since the test conditions (string stretch) would be the same. I also have seen it suggested to test the open string with the 12th fret harmonic which accomplished the same thing. Anyway, I wanted to test these different methods to see if one worked better for me than another. To do this, I used each of the 3 methods to adjust the intonation on the E, D, and B strings. Afterwards, I checked the pitch of the open string, and when I was fretting at the 1st, 5th, 8th, 12th, and 13th fret (excluding the two that I had already used to calibrate since these were by definition identical). My tuner seems to have 28 bars from one semitone to the next so that would be about 3 cents/bar assuming that the scale is linear (that as you get farther and farther away from the target pitch, each bar reflects the same number of cents - which may or may not be a valid assumption, but close enough). Anyway, the results are in the table below. I don't see that any method is superior to any other method in terms of the end result. No matter what, my open string notes and fretted notes are not going to be perfectly intonated (is that a word) with each other. Maybe the difference is below the threshold at which I can even hear or would care about though. The only way I can think to minimize the effect is to use short frets on a guitar with low action so that string stretch when you fret is at a minimum (my action might be a tad high right now). I assume that the trade-off is more fret buzz. For what it's worth, I have a vibrato bar and a zero nut. I don't know if that affects any of this or not. 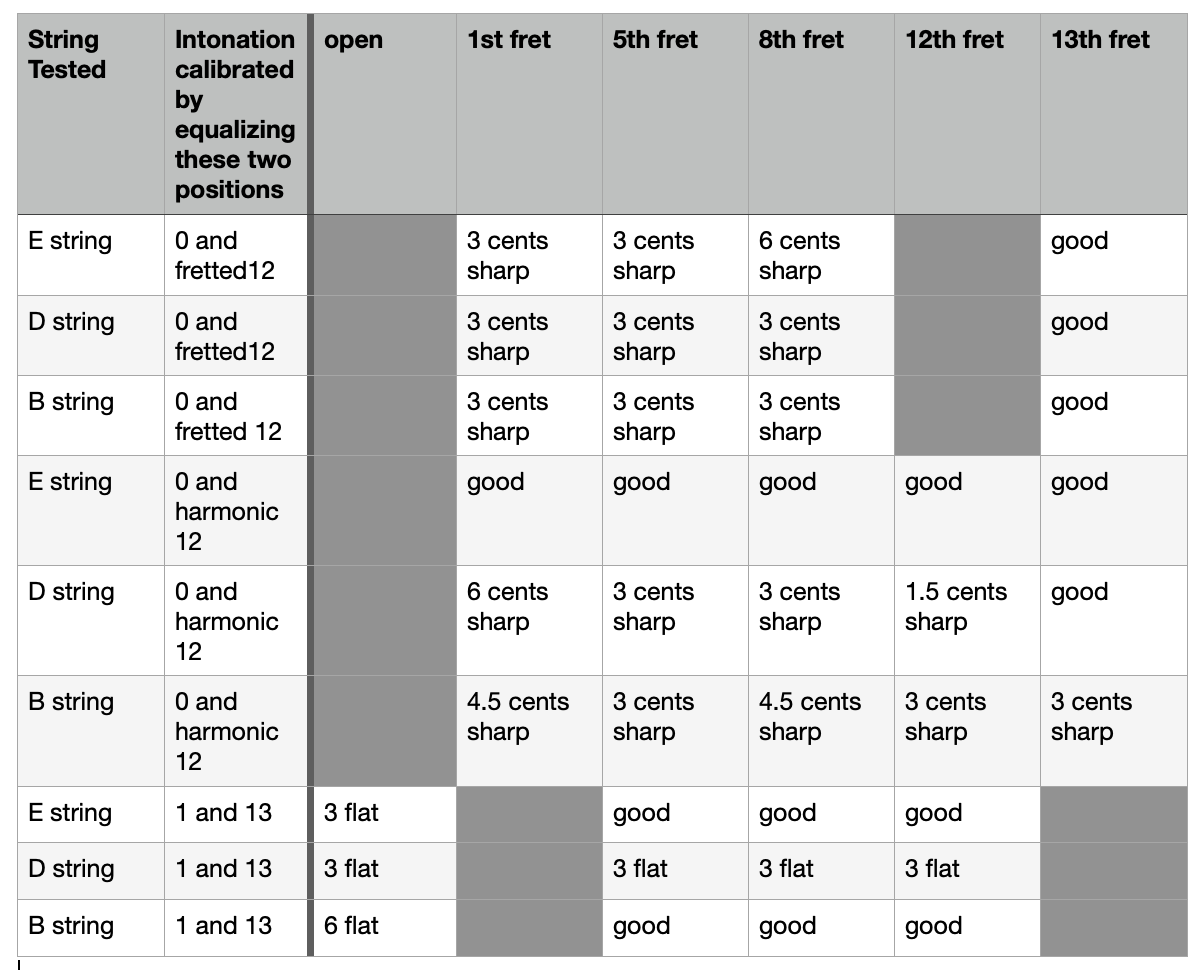 FYI - I went ahead and lowered the action on my guitar. As a result, the sharpening effect of fretting a string was noticeably reduced and seemed to benefit my ability to intonate the strings properly.

[p]Good observation. That's the reason good action or string height is so crucial. Even then it's difficult & sometimes not possible to get perfect.

Some guitarists set their guitar up so that it is just a little flat in order to compensate for the fact that it goes a little sharp when you fret it! Especially if you play or pick heavy handed!