Testing 1…2…3… I've owned this amplifier for about 16 years now and decided to review it.

BTW: Anything inside brackets [ - ] denotes what that particular stompbox or effect it is modelled after.

COST: Brand new I spent about $699 on the head, $499 on the cabinet and $299 on the foot controller at Guitar Center. You can find these used on ebay at whatever the market value is. Mine is rare and might be tough to find though.

INTELLIGENT POWER: [br]Most people think that a digital amp cannot respond like the true tube amps they strive to emulate. However, this Vox Valvetronix is a hybrid amp - a marriage between the digital expertise of Korg's ToneWorks and Vox. A brilliant idea! The preamp is a complete arsenal of realistic amps/effects using Korg’s electronic and digital technology. Korg's reputation has earned critical acclaim in sound modeling technology for reproducing the characteristics of speakers, cabinets, acoustic fields, microphones, etc. So while much of the tone creation and shaping is done by Korg, it is Vox's Valve Reactor power amp doing 100% analog work. The power section has two dual-triode 12AX7 tubes and these are responsible for that louder and more responsive feel of a tube amp. The signal is then fed into the VariAmp power circuit for a 60 watt output… or 30, or 15 or even just 1 watt. No kidding. (I’ll get to the different levels of output later). For now - when set at 60 watts this beast is LOUD. Let me tell you: two 12-inch speakers in a closed back cabinet will push air! Because the circuit stage is completely transparent (doesn't color or change the signal in any way), the resulting output tone is pure valve (tube). It cannot be overdriven and unlike most solid-state amps, it therefore delivers accurate high dynamic range tubelike headroom. All this thanks to Reactive Feedback technology that tracks the speakers’ ever-changing impedance and adjusts the power accordingly. This is a very smart, modern amp with vintage sound.

CLASSIC STYLE:[br]Vox amps have a distinctive appearance and this one is exceptional. Wrapped in textured vinyl with corner protectors and regal gold piping, the trapezoid-shape head sits perfectly atop the 2x12 Celestion-loaded cabinet like a monument to the Beatles. The royal blue grille cloth is stitched with the classic Vox diamond pattern and neatly outlined with white piping and adorned with bright gold Vox logos. It is simply a stunner - one of the coolest looking amps ever made.

THE TOP PANEL:[br]Everything - the effects, amp controls and features are on top exactly as they occur in the signal chain of a real setup… in a word, it is very logical. Start out by plugging into one of 2 inputs: high or low gain and then choose the type of wah or effect you want “in front” of the preamp. I always plug into the high gain input for the biggest and beefiest signal. Your choices of stomp box effects include Compression [MXR Dyna-Comp], acoustic simulation, classic Vox Wah [V847], Auto wah, U-Vibe [Univox Univibe], Octave, Treble Boost (like the original Voxs), Tube OD [green Ibanez Tubescreamer], Fat OD [Proco Rat] and Fuzz [Electro-Harmonix Big Muff]. There are 2 knobs to dial in drive and level adjustments for each effect that you choose. Next, pick one of the 16 classic amp models, which includes (of course!) the best Vox amps ever built (AC15, AC30, AC15TB and AC30TB), plus a host of highly sought after American and British made classics (Marshall JTM-45 "Bluesbreaker," Marshall JMP Plexi Super Lead, Marshall JCM800, Marshall JCM900, Marshall JVM2000, MESA-Boogie Dual Rectifier, Soldano Super Lead 100, Dumble Overdrive Special, Dumble Steel String Singer, Fender Twin Reverb, Fender Tweed Deluxe and Fender Bassman). It's like having 16 of the best amps ever made! As far as controls go you get vintage chicken head knobs for gain, volume, treble, middle, bass, presence and master - in that order. Below these is a parallel effects loop panel with 3 sections: MODULATION (Chorus [Boss CE-2], Flanger [MXR M117], Phaser [MXR M101 Phase 90], Tremolo [based on the Fender Twin Reverb's] and Rotary [based on the Leslie]), DELAY (digital, tape echo or multihead) and REVERB (spring, plate or room). Independent control knobs for each section allow you to adjust each effects type and speed and there are red LEDs to indicate which one is activated. Very simple! There is also a bypass button to instantly turn off the effects making it easy to hear the difference between your wet and dry sounds.[br]On the far right side of the top panel are the preset, channel selection and tuner buttons… yes - there is a built-in tuner too! Vox didn’t miss a single feature here. There are 32 presets available just on the head alone (we will get to the pedal board in a minute) and they are divided into 8 banks of 4 channels. Vox’s factory set up the 32 presets for an entire library of classic sounds for Rock, Blues, Heavy Metal, Pop, Country, Jazz, Alternative, etc. (think Beatles, Stones, Sabbath, Van Halen, Metallica, Santana, Hendrix, Queen, Judas Priest, Nashville Country, Stevie Ray Vaughan, Led Zeppelin, Cream, Acoustic “unplugged” (best when used with a single coil axe in the neck position - sounds exactly like an acoustic guitar!), Lynyrd Skynyrd, Jethro Tull, Def Leppard... and so on). Want to start from scratch and create your own custom sound? No problem! It’s like having a stack of amps and a rack of effects at your fingertips with a handy write button to save whatever you come up with. On the back side of the amp you have 2 speaker outputs, a series effects loop (for your own personal ones), an impedance selector, a headphone out, line out and the foot-controller connection for the pedal board. A 4-position rotary switch allows you to set the Valve Reactor power amp output to 1, 15, 30 or 60 watts. Yes, you can blast out for stadium-loud concert rock at 60 watts or play quietly in your house at 1 single watt! Simply put - this amplifier is beyond versatile.

VC-12 PEDAL POWER:[br]The Vox foot-controller that came with a padded Cordura case is a MUST have for this rig. This not only expands the Vox amp’s features, but provides easy access to everything when playing live. First, it allows you to store 128 programs - 4x more than the 32 given by the head alone. Yeah… wow. Secondly, the 4 dual-function stomp buttons allow you to select in 2 different modes. In one mode it allows you to select from a bank’s 4 channels; in the other you can use them to activate/disengage the pedal, modulation, delay and reverbs separately. Amazing! There is no easier or more simple way to use so many options while performing live. In addition, the foot-controller has 2 chrome Vox rockers for the wah/U-Vibe and volume features. This is simply the best pedal board ever designed.

SOUNDSCAPE:[br]I have played my variety of guitars thru this rig with both single coils and humbuckers: (Fender Strat, Fender Tele, Epiphone Casino, Gibson Les Paul, Danelectro DC-59 and PRS Swamp Ash Special). The Neo-Dog Celestion speakers loaded in the cabinet will live up to your expectations and then some. You will feel that authentic, cranked up tube amp because it reacts to your touch and volume changes with it’s incredible tubelike characteristics and dynamics. I used the Fender, Marshall and Vox amp emulations the majority of the time - those are just my personal favorite tastes and you’ll be so impressed by the realistic crunch and clean headroom that you’ll never be able to tell the difference if you had a real VOX AC30TB next to this. It will shock you. As far as the awesome sounding effects go - they are modelled after some of the best ones made and so simple to operate. No one wants a complicated set up and this all-in-one package is so well integrated that there is no better digital amplifier out there today that looks this cool. It is a rare rig and Vox doesn’t make them anymore so good luck finding this 3-piece rig in one stop shopping somewhere.

[br]Pros: I consider this a great set up for using as a member here to learn anything on this GuitarTricks site. This is a great gigging amp, but can be played at household volume levels too for practicing and provides an infinite selection of sounds. You get just about any stompbox or modulation effect you could possibly want and you can save so many programs.

Cons: It’s a large rig that weighs just under 100 lbs. for all 3 pieces combined - this amplifier is NOT for the feint of back. I might put casters on the cabinet soon. The head and cabinet are over 40 lbs. each. Also, I personally prefer an open back cabinet because I like a brighter sound, but this was never a deal breaker for me when I purchased it. There's almost too many options and can be overwhelming at first. The 60 watt head is mono only - would've been nice to have it in stereo. Very tough to find this exact rig today. I would never use the line out for recording - it doesn't sound as good as the cabinet when mic is placed correctly.

The 60W head is plenty loud for performing with and the adjustable output makes it great to play at home too. The 2x12 cabinet matches perfectly and looks KILLER. Can't go wrong with the simplicity of using the foot controller with this. It has • High and low gain inputs • 2 speaker outputs, a headphone output and a line outputs • 128 possible programs! • chicken head knob controls • all the effects you could possibly need • digital preamp/Valve Reactor tube power amp supplied by two 12AX7 tubes • adjustable 1, 15, 30 or 60 watt total power output • Two 12-inch “Neo-Dog” Celestion speakers in the cabinet with neodymium magnets • Pedal board (also has a silent tuner too)! • If you can find this then bring your guitar and do a soundcheck with your favorite jams, because talk is cheap and the proof is in the pudding... just take it for a test drive and let your ears decide for you. 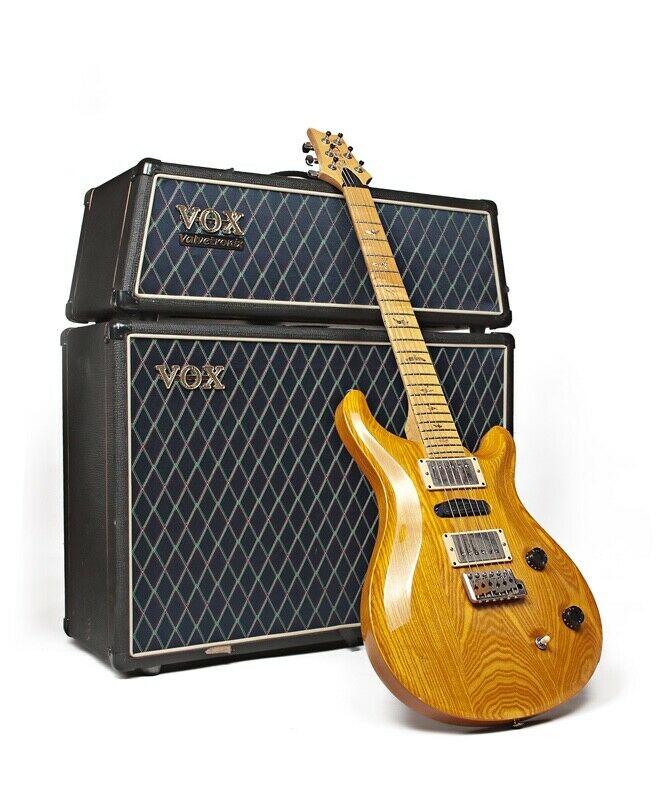 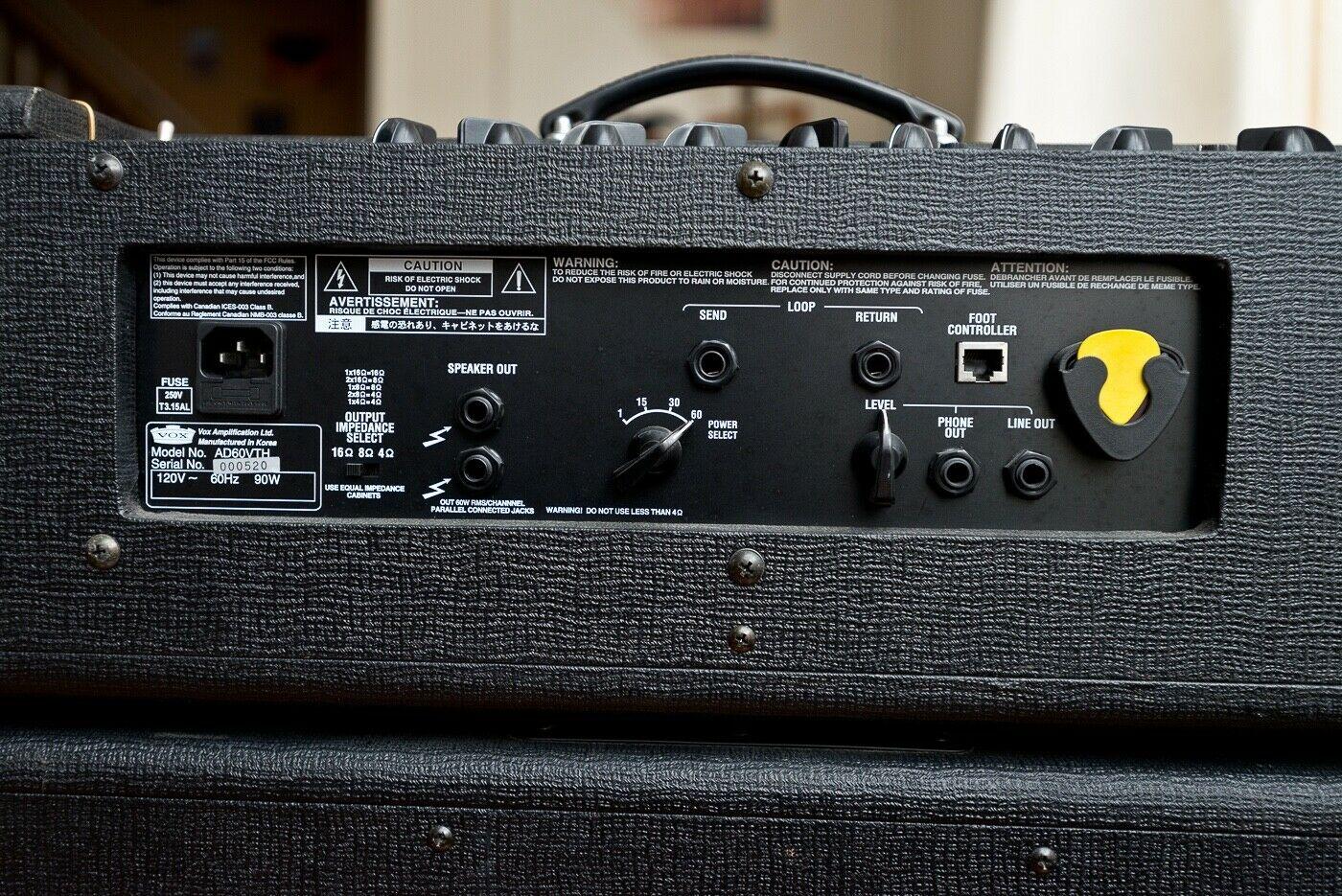