We've already touched on this a bit through the earlier tutorials, but in this lesson we'll complete your understanding of the very powerful 7th scale degree.

So the 7th is a note that you can choose to add to your basic triad. When it's just the regular unaltered 7 we call it the major 7.

Now as we talked about in an earlier tutorial, you can lower the 7 by a half step and get the bluesy dominant 7 chord.

Try it with your two-note major chord. Add the regular major 7 . And then lower it by a half step. Instantly it's super bluesy and tense! We call this a 7 chord, like A7 for example, even though one would think it would be more logical to simply call the major 7 chord a 7 chord, since that's the unaltered version, and then call the chord with altered 7 something else. But that's how it's done and once you understand that basic premise, it is the least confusing way to label these chords.

Major 7 is the unaltered 7th scale degree and Dominant 7 or simply 7 is the chord with the flatted 7.
Open In New Window 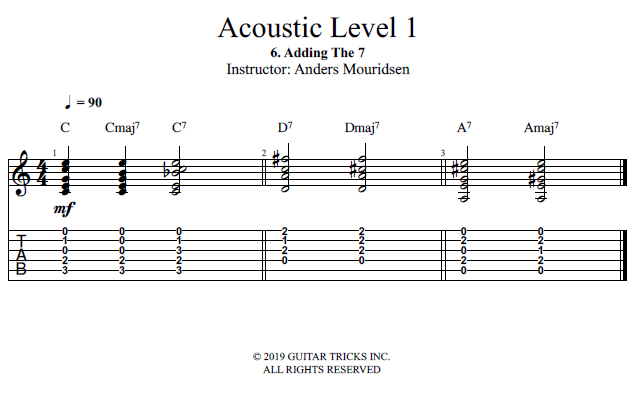