Counting Out The Scale and Understanding The Notes

A lot of people learn a scale like a collection of notes that they know work well in a certain context. And that's great, but it's even better if you actually take the time to zoom in further and look at the individual function of each of the 7 notes.

The first thing we're going to do is count out the notes. Think of these numbers as each of the notes in the major scale having a very specific job, some more important than others. These numbers and jobs are the same in any key. Meaning note number 2 is going to function the same in the key of A as it does if you move the pattern to the key of C.

If you learn how each of these 7 notes function (and you've already learned some of them) you'll have a much easier time understanding chords, melodies and also learning other scales down the road.

So let's take them one step at a time and explore their sound against our open A major chord.
Open In New Window 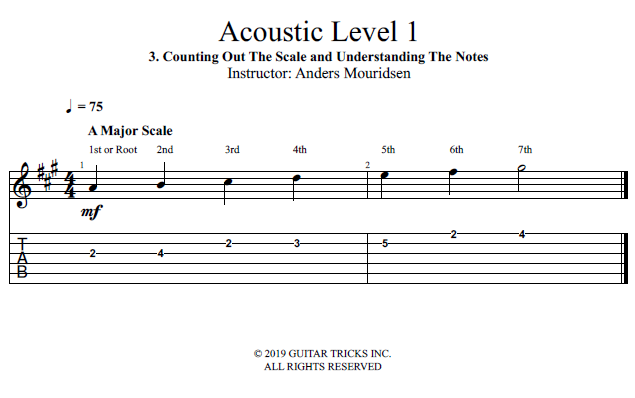