The idea here is to play four chords in a very typical jazz guitar progression usally called a "vamp". It is often used to start a tune, establish a groove. Or it is a small phrase used to finish a song section, chorus or verse, before starting the song form over again, or launching into the next section.

This is also referred to as a turnaround, as from a section of a blues tune that ends a section. It's a good way to think of the material we'll learn in this tutorial because it does have a strong bluesy flavor using all dominant 7th chords!

The chords are C7 (I) - A7 (V of II) - D7 (V of V) - G7 (V). So it's easy to see that they form a slice of the circle of fifths. The technique we'll use to play the chords also adds to the jazzy style. We're going to connect the chords using a bass line of chromatic approach notes.

This is a fancy way of saying that we'll play a note one fret above or below each chord right before we play the chord.

This first variation we'll play bass notes that approach each chord from one fret below the next chord root note.

Also, in this first exercise we'll play the exercise with a pick.

The idea is to give the music some motion. We accomplish this by playing the walking bass line in between each chord. 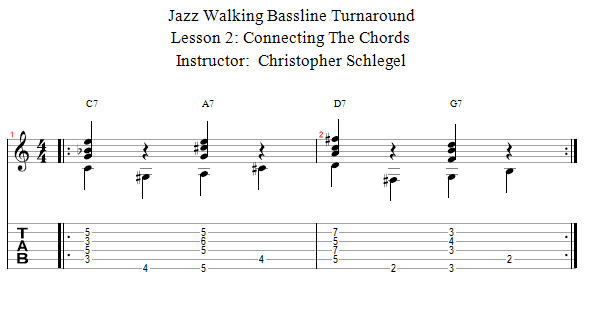