Georgia On My Mind

Our song involves an A section, B section, solo, and outro. The first A section starts us off with our main chord progression, which we will play several times throughout the song but each is a little different in how each section ends. I am going to play a combination of the licks you hear in this version, mixed with a consistent chord progression. You will also play this same progression over the harmonica solo that we will learn later.

The first four bars move by pretty simply, with light strumming on the C and a slight pickup into the E7 with a blues lick. You then switch to an open Ami chord followed by C7/G, our first slash chord. These chords are played just once and you want to let them ring for two beats each. We then play an F major barre chord, followed by an F# diminished 7th chord.

For the next two bars, our C/G to A major is the next move. This is followed by Dmi7 and G7 played as arpeggios. Then we begin our turnaround, which is E augmented to A7 first played slightly more laid back and with a slight triplet feel. This is then followed by the same progression a whole step down, playing D augmented to G7 with just a slightly busier feel.

This first A section really sets the tone for the rest of the song to follow. You will play the other sections of the song the same way for the first six bars, but throughout the tutorial I will be teaching how the other A sections will end. 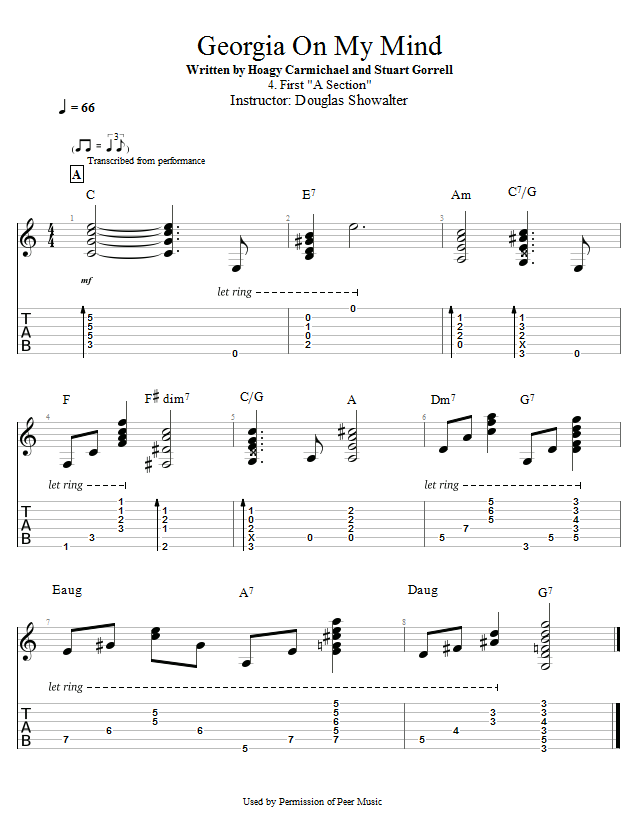 Georgia On My Mind