What is a 'Suspended 4th' Chord?

We learned that either way, it comes down to 3 essential ingredients, the 1st, the 3rd, and the 5th tone of the scale. The majorness or minorness is determined by the 3rd. The 1st and 5th tones remain in the chord either way.

The full chord is simply these letter name notes, played in duplicate, with the root note at the low end of the chord. This is important music theory to know, because the vast majority of chords you will ever encounter in your playing will be essentially a major chord, or a minor chord.

That said, how do we create more interest and flavor in music, than just using straight-up majors and minors?

We ADD new ingredients to the chords! We keep the essential 1, 3, and 5. But then we also add an additional ingredient, a new note. And depending on what that note is, it will have an effect on the sound and the feel of the chord, and how it behaves in the context of a song.

The first one we will try is called a Major Suspended 4th chord. Don't worry about the word 'suspended' just yet. Let's focus on the fact that we are being asked to add a tone # '4' to a major chord.

What does this mean? We will start with the straight up major chord, and we will add an extra ingredient, which will be the note that is tone number four in the scale.

Now, why is it called suspended? Because of the emotional effect it has on the sound of the chord. Most frequently played as a pair, with the pure major chord - then to the suspended, then resolve to the full major chord.

This sort of chord alteration is referred to as a 'passing chord', a chord whose very sound makes you want to move somewhere in the music. 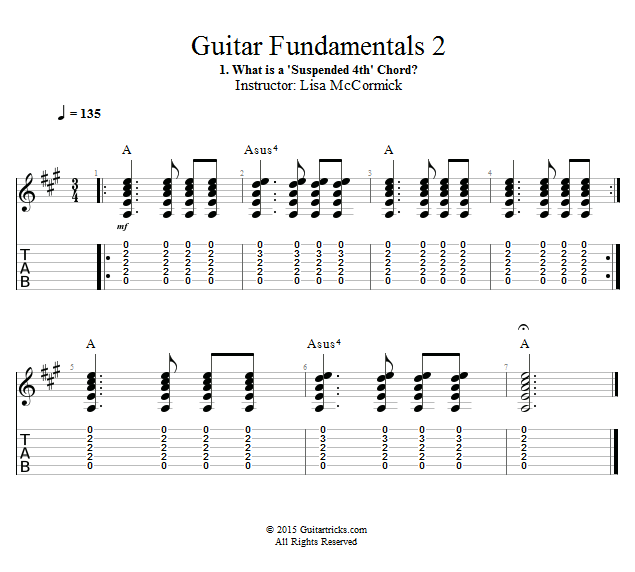