What is a 'Minor Chord' Made Of?

The Sad Anatomy of a Minor Chord

Just like the major chord, the minor chord is made up of only three specific notes, all played together.

When we learned about the anatomy of the Major chord, we pulled from the major scale, taking note #1, #3, and #5. We filled out the chord by simply duplicating some of those notes, and we always made sure the Tonic or the Root was played as the lowest note in the bunch.

A Minor Chord has only one small difference from a major chord.

In order to understand what that small difference is, letâ€™s review the fact that the major scale is a sequence of notes with a specific distance between each one.

Let's work with the 6th string. and review the number of steps between note number one, and note number three. This is 2 whole steps.


And then let's look at the number of whole steps between note number three and note number five. This is one whole step, plus one half step.

Fill it out with more Aâ€™s or Câ€™s or Eâ€™s and we have a A minor chord.
Notice the sad sound of the minor chord.
Open In New Window 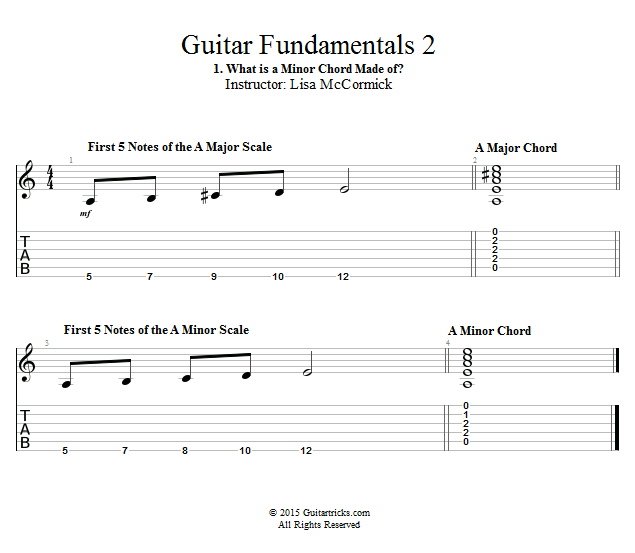