I Think I Love You: I-IV-V Progression

Now let's look at what we're doing musically. What do these chords mean, and what else can we do with them?

This song is a perfect example of I-IV-V, which is called a chord progression. (Always written in Roman numerals.) We're in the key of A for this one, so it works out like this:

Notice that there are three Major chords in a key. I, IV, and V. And since this song is in the Key of A, these chords are based on natural notes (not sharps or flats) so it's easy to understand. A, D, and E are I, IV, and V here.

These are the three most common chords played in music in perpetuity throughout the universe. If you know these three chords, you can play a very large percentage of pop, rock, folk, country, and punk songs.

But if you play them as power chords or barre chords (instead of playing them in first position), you'll see that you can now move them up and down the neck, instantly transposing the song into a new key. This is very difficult on piano, saxophone, or trumpet (imagine only having 3 keys to make all of those notes), because all of the sharps and flats change in non-intuitive ways. As guitarists, we don't ALWAYS have to think about it. We can simply play the shapes. Guitar is a visual instrument, and that's why it's so easy to start playing music on it very quickly.

And that's how we ended up with Wild Thing. It's primal, it's fun, there's not much thinking involved. But DO take the time to learn about the I-IV-V progression. Look into some other sections of this site to learn all about it.
Open In New Window 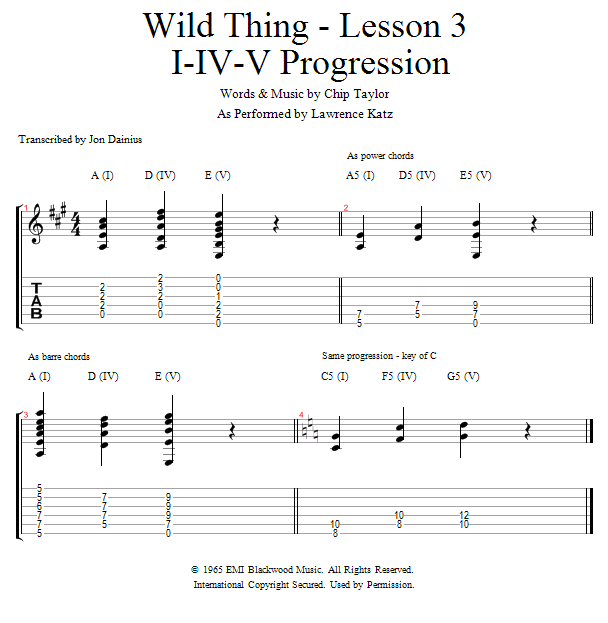