If you know three basic chords, A, E, and D, you're ready to start playing Wild Thing.

In switching between these chords, it can be easier if you find out which fingers don't need to switch strings. Like on your pointer finger on the D chord. All you do is slide it down on fret when going to the E chord.

Get the basic strumming pattern down, practice moving between these chords, and you've got it!

The only other thing you'll be doing is the verse, in which you just pick up your pointer finger and hit the D, G, and B strings open.

The entire song has almost the same exact strumming pattern. In fact, the other instruments play this same pattern. You can either play it like that, or you can try to make it smoother with some more loose strumming, as shown in the video. The trick to that is keeping that right hand moving up and down, but only play the notes you want to hear. Experiment with different ways of strumming and see what sounds best to you!

It's also OK to strum once across the strings while you are in the middle of changing chords and positioning your fingers. It's a little shortcut that most guitarists take. You'll start to notice that it is just part of being a guitarist and having to get from one place to the next gracefully. It's sort of like saying "uh" while you are getting your next thought together. Sometimes it adds a lot of personality to what you are saying. In rock music, it's totally OK!
Open In New Window 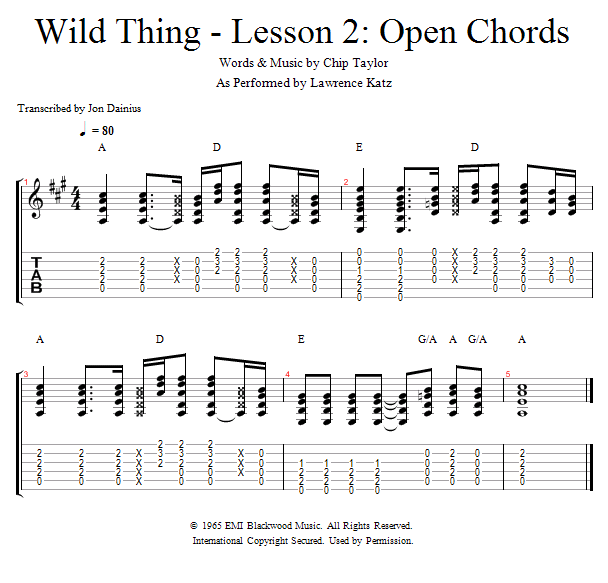