I have a wonderful Stratocaster V6P with 3 Wilkinson Stacked P90's

Little bit on the guitar it has solid body American Alder with hard maple neck, it's a heavy stratocaster, the current stock P90's are fine, but there is feedback when the P90's get to close to either amp even my little BOSS Katana Mini,

When guitar was setup I asked the tech to give me the values of the P90's the highest being the bridge at close to 15.12k neck 9.06 k Middle 9.16 k , it has a Volume and Tone knob the tone knob rolls off , these P90's are stacked and ceramic

I love to have decent P90's that have sweet tone for blues and hard rock, I don't want to break the bank but this guitar is a keeper, well built , incredible sustain, and never goes out of tune really thanks to the Wilkinson Bridge and Tuners, any ideas would be great 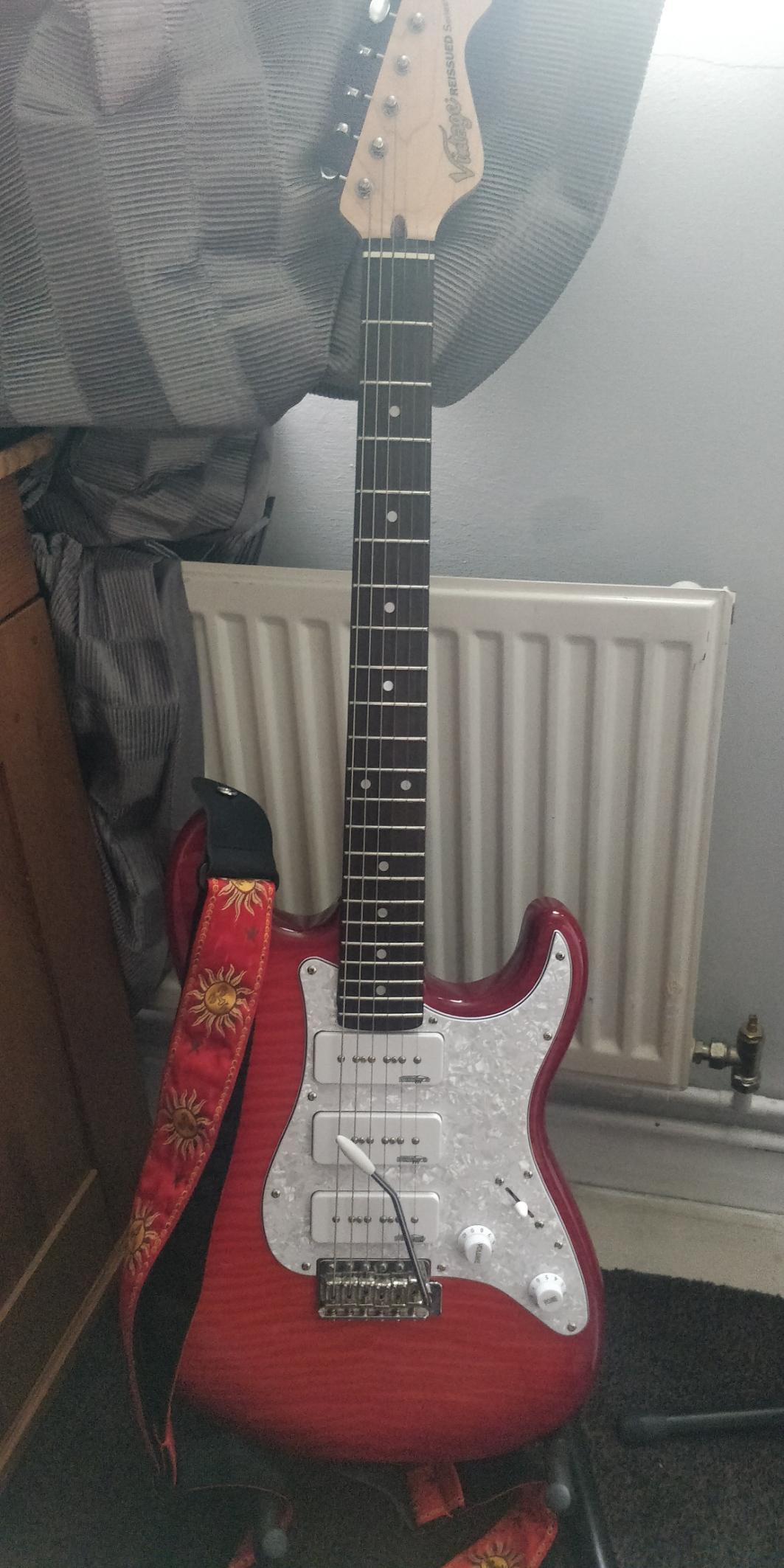 I had an earlier comment but changed it because the more I looked at your guitar the more it I appreciated it. It is a striking looking guitar. What I 1st honed in on were the 3 pickups, but then I caught the body. It is very similar to the guitar I have in my lap right now: Godin Progression Plus in Cherry Burst.

Your guitar is beautiful!

Sorry, I can't offer any technical advice, but I would be keeping this beauty as well.

Vintage here in the UK makes cracking guitars, this guitar is a beast, I am not selling it there is not many guitars around like this, the P90's are fine, but always room for improvement ,

I've always had good results from Oil City Pickups and Alegree Pickups, would be worth having a look at the websites to see if they have anything you like.

I have to agree with @William MG. That is one very striking Strat. I love the stain showing the pretty alder wood grain through.

You might look at Iron Gear Pickups. I know they offer pickups for all guitars but it seems as though, from what I have read in the forums, they tend to specialize in Strat pu's. I ordered a set of Texas Locos and Steam Rollers from them but haven't gotten them installed yet! They shipped fast! lol

I'm definitely not making any comparisons to the other companies recommended because I can't. But another one to consider.

Let us hear it when you get them changed out.

Maybe a stupid question but is the cavity shielded. Some foil tape might help.

I love to have decent P90's that have sweet tone for blues and hard rock, I don't want to break the bank but this guitar is a keeper, well built , incredible sustain, and never goes out of tune really thanks to the Wilkinson Bridge and Tuners, any ideas would be great

A fan of P90 pickups too, and also a fan of Korean made Wilkinson branded pickups in general, TMK, I don't think Wilkinson's P90s are wax potted. [br][br]IMPE so far, I haven't found absence of cavity shielding critical. In fact the only guitar so far I've experienced feedback issues with was cavity shielded (paint) and only the bridge pickup of the Roswell covered humbucker paired set, both medium output (8.4k) PAF type alnico V. The microphonics on the bridge pickup were just crazy. If adjusting the pickup:string height spacing doesn't eliminate it as the primary contributing cause, alternative pickups or wax pot the bobbins?

Watch this. Vid is a few years old now, but might be one inexpensive solution if you're handy? [br][br]If not comfortable potting them yourself, pay a luthier to do it for you?

Obvious alternative of course, is try swapping out for alternative P90s. Other than my own personal experience with OEM G&B, I haven't really any suggestions I can personally recommend to Wilkinsons other than the obvious which can usually be depended upon in any pickup IMPE, i.e. Seymour or DiMarzio of your preference. [br][br]Anecdotal comparitive. I have two guitars fitted with P90s now. The PAC311H is P90 neck only but (edit: memory fail, overstated the output in my initial write) a [u]medium output[/u] P90 at 8.4k. Tone and performance so similar to Seymour Duncan's SP90-1n in every respect, it's difficult to distinguish between the two, by my ear at least. The other (Revstar RS502T) has neck and bridge P90s. (NB: not me playing here. I wish -a role model) All P90 pickups in this instance manufactured by G&B Korea. The Pacifica's are a G&B off the shelf spec AFAIK, whereas the ones in the Revstar rebadged as YGD were engineered by G&B to Yamaha Guitar Development design spec. All plastic case covered. I don't think they are wax potted, but none squeal.[br][br]Have two guitars I have retrofitted with OEM Korean Wilkinson branded pickups and other Wilkinson hardware tuners, bridge, saddles, but a Tele (Wilkinson Alnico set) & HH (Wilkinson WHHS set), no Wilkinson P90s. Nevertheless a Wilk fan here too. [br][br]GL & keeps us posted on how you go.