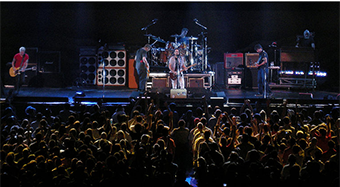 I have been to a lot of concerts over the decades, and I've logged my fair share of miles following this band and that, but being the raging aviophobe that I am, never have I ever seriously entertained the thought of flying somewhere to see a show. Never, that is, until a couple weeks ago when I threw back a few shots of vodka (okay, more than a few), hopped a plane to Seattle, and flew clear across the country to be part of a sold-out Pearl Jam show in the motherland.

I've been a fan of Pearl Jam's music since their debut album Ten broke in 1991, and I am a card-carrying member of their fan club, the Ten Club. But it was only just recently that I jumped into the Pearl Jam culture with both feet and joined devotees of the band who crisscross not only the country, but the globe to hear Pearl Jam play, following the group from city to city, venue to venue. After buying tickets to four dates on the recently wrapped North American leg of the Lightning Bolt tour, in four different states, one of which I actually had to fly to, I realize I have turned that corner from fan to fanatic.

Pearl Jam's Ten Club is a loyal, rabid, some might say obsessive fanbase that is legendary in the music industry and today numbers in the hundreds of thousands. Members enjoy all sorts of perks (like an exclusive Christmas single), get first crack at the best concert tickets, and consider it a cardinal sin to sell an extra ticket for more than face value. Fans snatch up show posters in a frenzy, which they often get professionally framed, and they buy, sell and trade these posters among themselves. They dissect setlists on the fan club's forum and get together at shows, which are more like family reunions. Sometimes fan club members even marry each other. Many have separate bank accounts set aside to support their touring habit, and some have time off for Pearl Jam shows written into their contracts at work. They amass scores of concert recordings (in 2000, Pearl Jam started releasing official ''bootlegs'' of almost all their shows) and set up fundraisers to support the band's charitable causes. The result is a remarkably close connection between one of the most beloved bands on the rock scene and their most passionate fans.

There's a flow of energy between Eddie Vedder, Stone Gossard, Mike McCready, Jeff Ament and Matt Cameron and their intensely dedicated followers that rarely happens in music. A Pearl Jam show is best described as being like a group karaoke. Like a group hug. Like sitting around a campfire with thousands of your closest friends who have all come home for this one event, "home" being the show. The band routinely packs arenas for two, sometimes three consecutive nights thanks to these hardcore fans who travel far and wide to sing along with the band's every word, spend a month's wages on prized merch, and perhaps score a coveted guitar pick, tambourine, setlist, or a sip of wine from lead singer Eddie Vedder's ever-present bottle.

If all this brings to mind a certain other fan-friendly band, well, that's not a coincidence. In a 2006 interview with Entertainment Weekly, Pearl Jam's longtime manager Kelly Curtis said the band were studying the Grateful Dead model. "We just went and hung out in their offices and looked at how they did things. It was so grassroots and so great." Now, some twenty-three years into their career, it seems Pearl Jam have morphed into a modern day Grateful Dead.

So how exactly have they done it? Let's take a look at what has made Pearl Jam, and the Dead before them, the pied pipers of rock. In a piece for The Build Network, collaborators Tim Bierman (manager of the Ten Club),Whitney Pastorek, and Aylin Zafar list three guiding principles of Pearl Jam's superfan strategy:

Invest in your superfans, and they'll invest in you. For the vast majority of its live shows since 2000, Pearl Jam has reserved the best seats in the house for Ten Club members, who pay regular ticket prices in exclusive pre-sale events. To keep up with demand, Pearl Jam developed an in-house digital ticketing system that's integrated into its password-protected Ten Club site. "We didn't really look at it as an investment in capital, as much as an investment in our fans," Bierman says. Last year, Pearl Jam took it a step further by partnering with the third-party technology company Modlife on "a new membership-based ticket 'lottery' system" that prompted the fastest concert sell-out in the history of Wrigley Field.

Trust your superfans with your brand. Contests, giveaways, and reward systems are nothing new. But in 2012 Pearl Jam gave one of the Ten Club's founders the ultimate thank-you: total control over the band's setlist. Brian Farias, who had seen Pearl Jam in concert 108 times, was flown to Amsterdam to attend a few shows and meet the band. There, frontman Eddie Vedder invited Farias to choose the songs Pearl Jam played live. "Forty to fifty drafts later, Farias created a setlist that many fans are calling 'the greatest' Pearl Jam has ever performed," writes Aylin Zafar in Time. "The band brought Farias out for a bow at the end of the show, an unbelievable moment for the superfan."

Never act like a rock star. "The band leads by example," Bierman says. "Whether it's a concert promoter, an usher at a show, or the fan in the back row, they are treated with respect. When you see that happening night after night, it becomes engrained in your day-to-day work. Respect for our fans is the guiding philosophy of Ten Club."

Greg Kot, music critic at the Chicago Tribune, says the approach used by both the Dead and Pearl Jam is a how-to for building and nurturing a fanbase. He adds the following to the list:

Get digital. In the pre-Napster era, the Dead had already mastered what technology expert Esther Dyson once suggested was the key to the looming digital revolution: the selling of "services and relationships" to the fans.

The Dead ranked with the most comprehensively documented bands in rock history, in large measure because it allowed fans to record its concerts and freely circulate the tapes. In addition, the Dead self-released dozens of high-quality recordings of some of its most memorable concerts, including the beloved Dick's Picks series, overseen by archivist Dick Latvala. Pearl Jam has also allowed fans to tape concerts, and has made the majority of its shows available in a series of high-quality 'official' bootlegs and free streaming audio online.

Create a product that can't be duplicated. The Dead embraced a no-show-the-same policy that made concerts the center of its business model. Pearl Jam did the same, shaking up setlists nightly and avoiding rote 'greatest hits' performances. Like the Dead, Pearl Jam present their music live with little spectacle or fancy staging—just five guys and their amplifiers digging deep into their shared history. The focus becomes which songs are performed and how they're sequenced. Each night tells a new story that encourages fans to see multiple shows on the same tour, knowing that each will be unique. Faithful fans of the band know that one of the best parts of seeing Pearl Jam live is that you never know what song they will play next. With ten studio albums and almost 200 songs, Pearl Jam has the ability to have a very different show every night.

DIY—Do It Yourself—is best. The Dead slowed its studio recording pace to a trickle in its final decades, even as it became more popular. Though the Dead maintained relationships with major labels, the band's operation was run by a network of friends and associates from the San Francisco area under the umbrella of Grateful Dead Productions. In the last decade, Pearl Jam have put less emphasis on churning out new studio albums and more on their live show. They now use big record labels to help distribute albums and little else. From ticket-selling to music production, Pearl Jam is as much a business as a rock band.

Remix, remake, reinvent. The Dead took the music of the past (blues, country, folk, early rock 'n' roll, jazz, experimental and even classical music) and gave it a psychedelic twist that made it all sound fresh again. Pearl Jam does the same for the classic rock of the '60s, '70s and '80s. Pearl Jam's latest release, Lightning Bolt, which hit the charts at #1 upon its release in October, evokes the music of Pink Floyd (the power ballad "Sirens"), the Who (the rollercoaster title track) and the Byrds-via-REM (Swallowed Whole), as well as feisty late '70s punk ("Getaway," "Mind Your Manners"). But it doesn't sound dated in part because of lyrics that address big subjects—ecology, mortality, faith—with a skepticism that is a Pearl Jam trademark.

In a digital culture, the experience of seeing a concert stands apart. Of course, many shows wind up on YouTube and other video sites, but that experience pales next to being there in person, something the Dead understood from the beginning and that Pearl Jam have championed.

The Dead amped up their touring schedule at a time when recording technology advanced and the industry's focus shifted toward making and selling albums; important bands such as the Beatles and Steely Dan stopped touring altogether to perfect their music in the studio. Pearl Jam's business approach, in contrast, flows with the current tide: touring is now ahead of recording as the prime source of revenue for most bands. Yet, like the Dead, Pearl Jam has kept its ticket prices relatively reasonable, often below market rate. A typical show on the current tour sells for about $80, whereas most of their arena-touring peers top out at more than $100.

The Dead, and now Pearl Jam, understand that certain values transcend generations and can sustain a band for decades. Although I've never been a Deadhead, I get and embrace the mentality. Now, I just have to get my bank account to get it.

Oh, and if anyone out there has a Pittsburgh tour poster they'd be willing to part with, I have an extra Seattle to trade. ;) Image Credit: Flickr by El Mariachi 94 at http://flickr.com/photos/[email protected]/2612149194. It was reviewed on 4 February 2009 by the FlickreviewR robot and was confirmed to be licensed under the terms of the cc-by-2.0.